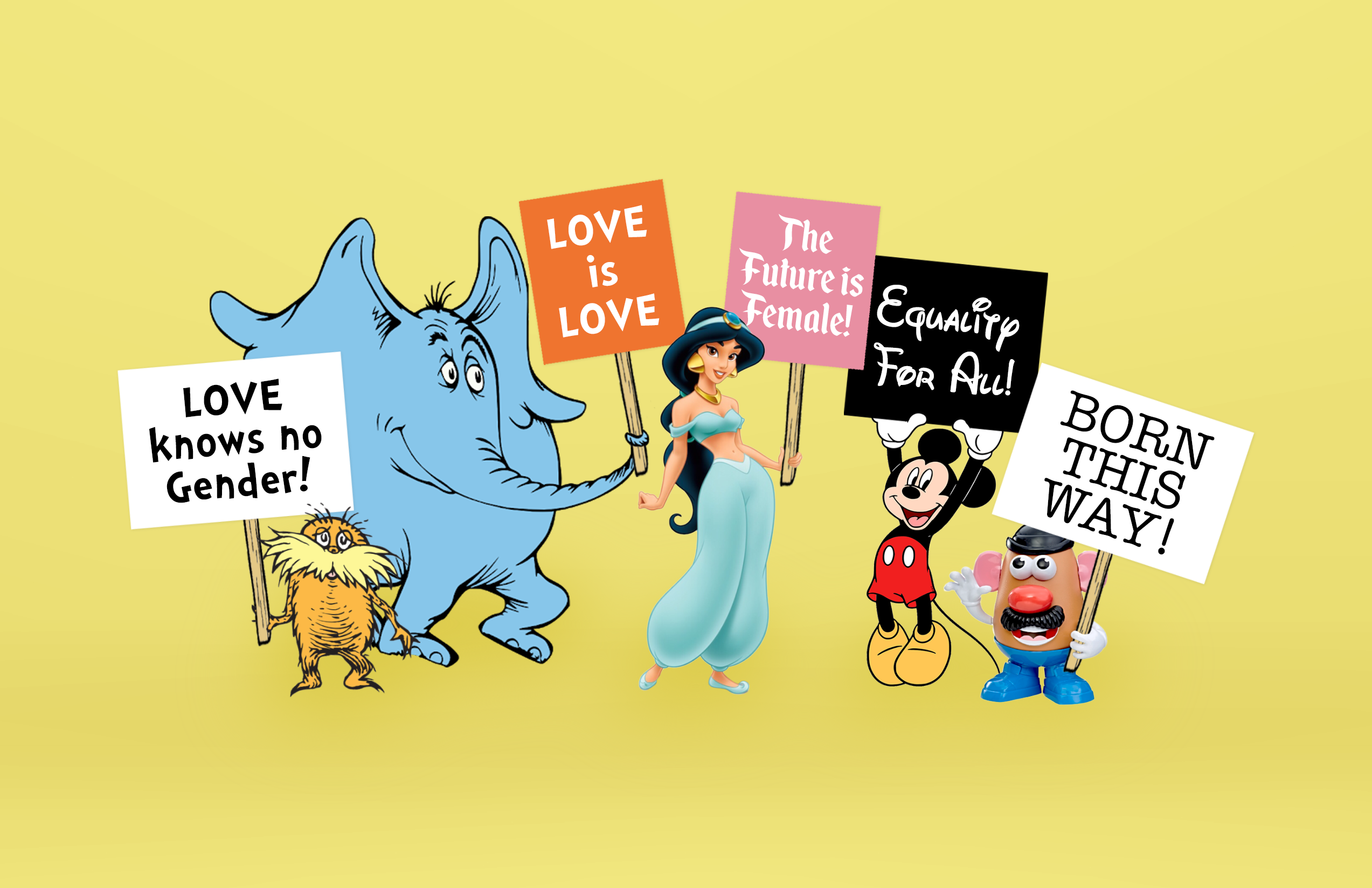 Children Are The Future

How Brands Are Embracing Inclusivity

In The Greatest Love of All, Whitney Houston declared that “the children are our future. Teach them well and let them lead the way. Show them all the beauty they possess inside.”

She also declared that “crack is whack” and that statement rings very true as well.

But back to the kids.

Chances are, if you’re reading this, diversity in children’s entertainment wasn’t something that you were truly exposed to when you were young enough to tolerate that sort of entertainment (does anyone else wonder how they sat through the incredibly slow pacing of Mister Roger’s Neighborhood?). Sure, you would see the occasional non-white person or learn about a different culture, but children’s entertainment, like most media until the last couple of decades was very able-bodied, heterosexual, and white. Of course, once you got older and became exposed to more of the world, you realized that wasn’t the case, but the impression that was left on many kids of certain generations was that the world was rather vanilla.

Sure, you don’t want to introduce children to certain adult concepts too early in life, but one thing most have grown to realize about children is that they are often a lot smarter and more perceptive than they are given credit. A bit surprising when you consider that everyone was a child at some point and at some point realized that you don’t ever really grow out of being a child, you just get responsibilities and money which sort of siphons the fun and innocence.

Diversity and inclusion have become major points of conversation in the social sphere in the last few years as people have begun to realize the importance of representation, particularly when it comes to children. A study conducted by the University of Chicago found that children who heard multiple languages spoken were more receptive to people who spoke other languages. If by college, these children haven’t been exposed to diverse people, a college campus will certainly do the trick in expanding their cultural mindset. In Ijeoma Oluo’s highly compelling book about the legacy of white males in America, Mediocre, she writes, “College puts you in closer contact with more marginalized people than life outside of college is likely to. …Getting to know people of different backgrounds and identities is one of the best ways to build empathy and community with them.” It turns out not only can children handle seeing people that don’t look or act like them, they end up becoming better and more well-rounded adults as a result. These are adults who don’t waste time arguing over which bathrooms transgender people can or cannot use or refusing to make wedding cakes for same-sex weddings or taking to the streets with tiki torches from their local hardware supply store chanting racist sentiments. These are adults who fight for equality against the aforementioned adults, who grow up secure enough in their own worth that they don’t feel threatened by others, and who recognize there are more positives than negatives with diversity and inclusion so they embrace it. That’s the “teach them well and let them lead the way part” Whitney was talking about.

Recently, a few major children’s brands have taken active strides in doing their part to expose children to more diversity and including all types of individuals in the children’s entertainment discourse.

Hasbro sent shockwaves across the internet when they announced they were dropping the “Mr.” title from the Potato Head toy line officially making the spuds genderless, which frankly is a far more comforting thought than to wonder about the genitals of a potato. Potato Heads would still come with the pieces to make them a “he”, “she”, or “they” but the main difference is that the brand name and the family sets would be gender-neutral meaning Potato Heads could have two dads or two moms or a dad and a mom or one parent who was left to tend to the kids alone after the other parent decided parenting just wasn’t for them. Kids have active imaginations these days. The family of spuds would now more accurately reflect what homes in America look like even down to the completely round shape of the bodies which most are sporting after a year of lockdown. It’s a seemingly subtle step and frankly, who wasn’t already experimenting with gender norms as a child with their Potato Head and pairing Mrs. Potato Head’s lipsticked lips with Mr. Potato Head’s awful bowl cut? The importance of this move, however, shows the toy company recognizes the changing landscape of the country, and again, that representation and exposure matter.

Dr. Seuss books are often the first books many children complete from cover to cover. Although most of the books were written and published in the 20th century, Dr. Seuss Enterprises earned $33 million in 2020 and Dr. Seuss is listed as the highest-paid dead celebrity second only to Michael Jackson. For the most part, the books have held up, but you must also remember these books were published in the 20th century and Dr. Seuss was very much a product of his time. That’s not an excuse. It’s just clarifying that he came along during a time when no one batted an eye at an adult white man drawing barefooted, leaf-skirted Africans or Chinese people with pointed hats holding chopsticks into a book for kids. He put a fox in socks during a time when people were experimenting with some serious psychedelic drugs so people were really losing their minds over this guy.

Earlier this year, Dr. Seuss Enterprises announced they would no longer publish six Dr. Seuss titles as the books contained content that was racist and insensitive when reviewed under a modern lens. One could argue that the books should stay in the public space as a relic of racist times gone by and an example of what not to do, but on the other hand, why would you do that? The point of diversity and inclusion is not to fixate on “why this was bad” but rather say “look at the beauty that can be found.” By removing the books from circulation, Dr. Seuss Enterprises is completely killing their contribution to racist tropes giving them no chance to even resurface in the public forum and thus allowing people to move on and focus on how we can continue to improve on our diversity and inclusion talks.

Another 20th-century company making strides is of course, the Walt Disney Company. As one of the leading companies in the world, Disney has been on the rather progressive side in their diversity and inclusion efforts throughout the years (save for a few hiccups) and those efforts have paid off as the company is still one of the leading companies in the world nearly a century later. Disney recently unveiled the redesign of Sleeping Beauty Castle in Hong Kong Disneyland which includes nods to 12 diverse Disney princesses and heroines with each figure having a tower that is culturally themed to their story. For example, Princess Tiana’s tower includes water lilies native to her Louisiana roots and Snow White’s tower includes apples, which is actually a bit mocking when you think about it, but one can only hope she’s learned her lesson.

Disney has received criticism over the years for the rather misogynistic portrayal of early princesses and female heroines who spent a lot of their time worrying about finding true love and their outward beauty instead of being strong, independent women, who don’t need no man, sister girl! They also took this into account inside of the castle where you can find bronze statues of 14 heroines all depicted in powerful and engaging poses such as “Ariel standing proudly as she exercises her newfound freedom and Jasmine riding solo on the magic carpet.”

All of these companies are demonstrating how you can grow and adapt your brand to fit with the times. Tradition is nice, but that doesn’t mean it has to stick, especially if the tradition no longer fits the current discourse. You may not have noticed, but traditions, especially those delivered orally, always change over time. It may not be a grand change, but new little details always sneak their way in until at some point that centuries-old tradition of sacrificing lambs for dinner or that fairy tale about evil step-sisters chopping off parts of their feet to fit a glass slipper turns into just picking the best chops at the grocery store and no one losing body parts to fit in a shoe that couldn’t have been comfortable to wear anyways. It’s incredibly empowering for kids to see themselves represented in entertainment and media. They grow up with a stronger sense of pride and understanding in themselves and others. Childhood memories stick and whether kids realize it or not, being able to identify with toys and stories that include them makes a big impact.

That’s the “show them all the beauty they possess inside part” of Whitney’s song.