Putting the U in F*CK

When is it time to start cussing?

No one asked the students if they wanted to come back to campus this fall. Those that did want to come back weren’t asked what would make them feel safe doing it. Maybe in some walks of life safety choices can be left to individuals, but not when those individuals could be crowded into dorms and classrooms and confined to the handful of acres in and around ivory towers. Where there’s little room for error, uncertainty is the enemy.

When Boston University decided to reopen for the fall semester, its administration wanted to make protocols as clear as possible for its students. There was, however, the usual problem of older folks trying to get through to younger. So BU’s External Affairs office contacted two programs within the school’s College of Communications, AdLab and PRLab, and asked their students to collaborate on a campaign.

“When you communicate a message,” says Hailey McKee, PRLab’s Account Director (and soon to have her M.S. in Public Relations), “it’s sometimes best to come from the people who also need to hear it.”

The question was how to deliver it, and how quickly it could be done. The campaign’s eight-person staff was working with little time (and from home), and with a substantial stake of its own in the project. As McKee observed, they themselves were part of the student audience their campaign was intended to address, and no doubt on edge about their own health and safety when they returned to campus.

Unsurprisingly, “We were looking for an edgy campaign,” says Hannah Schweitzer, a BU senior, President of AdLab, and the campaign’s Project Manager and Account Executive. They began brainstorming.

“F*ck It Won’t Cut It,” one of the project’s Art Directors, Mac Wylie, suggested (presumably without the asterisk). 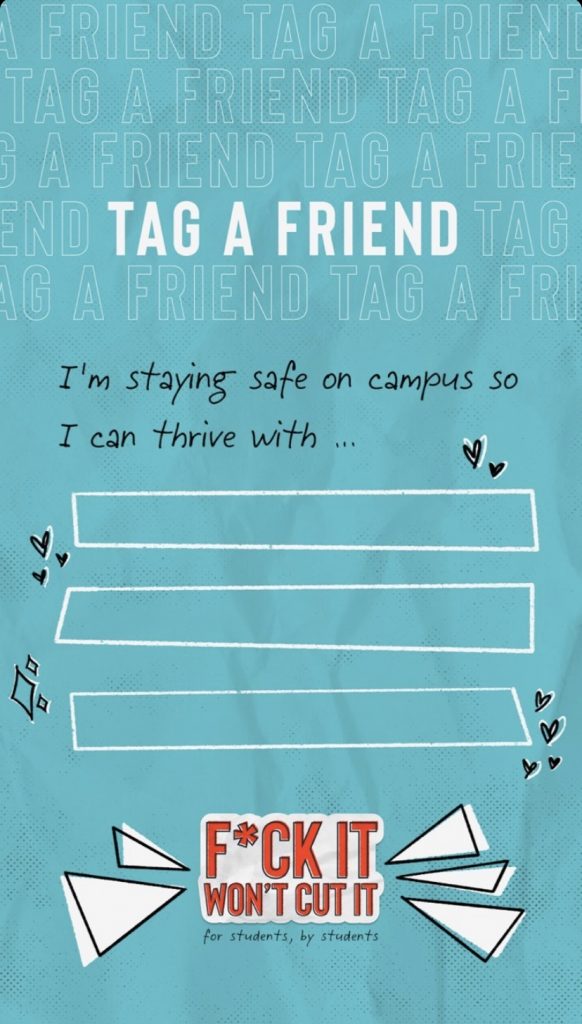 By way of clarification, Schweitzer adds:

“We weren’t like, ‘Oh yay, a swear word! That’s what’s gonna capture people’s eye.’ It was the mentality. It was the idea that ‘fuck it’ is such a common phrase and mindset. That’s what we wanted to capture, that mindset. We weren’t going into it thinking, ‘We need to swear, cause we need to be cool.’

“A lot of young creatives want to be edgy for the sake of being edgy,” she continues, but “edgy only works when it’s necessary and when it’s backed by research.”

Which they undertook. According to senior Lindsey Rosenblatt, a project copywriter and AdLab’s Executive Vice President, the staff “really researched heavily why using a profane word actually works. We conducted focus groups at BU” — who firmly preferred “F*ck It Won’t Cut It” over the other potential slogans presented to them — “and did research into students and what would motivate them to follow the right rules. We found that students need a harsher approach, and we really needed a campaign that would break through the noise.”

They took the “F*ck It Won’t Cut It” proposal all the way up to the university’s President, who approved the slogan. The school then applied for a trademark.

If all of that sounds much more like the approach of professionals than like a rabble of protesting students — who in an earlier era would have taken over the President’s Office, not sought permission from it — that’s because it is professional, in virtually all but name. AdLab bills itself as “the country’s largest student-run agency,” with an impressive list of commercial and other clients; PRLab announces that its “clients aren’t case studies. They’re paying brands and enterprises across the private, public, and nonprofit sectors.” These university labs do real-world work, advised by ad-world veterans. They mean business. You should hire them.

That is not to say it’s all serious. With a name like “F*ck It Won’t Cut It,” how could it be? And that’s the point. Fun sells ideas, especially when the ideas themselves don’t sound like fun: wearing masks, washing hands, eating in your dorm room, not going to parties. (And, Schweitzer adds, “maybe your safest sex partner right now is yourself.” So not college.) 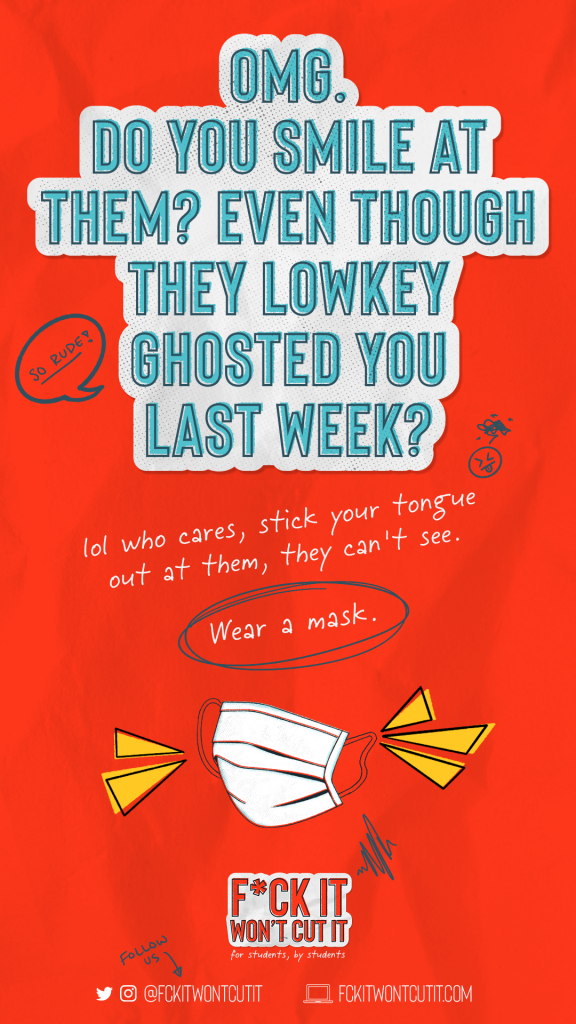 In early August, FIWCI launched on social media. The campaign has quickly picked up nearly 3,000 Instagram followers. “We see a lot of Gen Z’ers using social media as a way to share opinions,” Schweitzer says. “They can take our stuff and reshare it on their Instagram stories.”

And they do. “F*ck It Won’t Cut It” is quickly becoming, to all intents and purposes, the unofficial-official hangout of BU’s Back2BU initiative. It’s where students go for safety messaging that’s up-to-date, clear, simple, and entertaining, e.g. the FIWCI Instagram’s recent post: “We know the Back2BU website is, um, long. So, we read it for you

” — followed by THE MOVE IN SITUATION SIMPLIFIED” in a few punchy infographics on a background of vivid Boston University red.

“Our social media has a positive spin,” Schweitzer adds. “We talk about things that are relatable. We talk about Tinder. We talk about cliques. But everything is rooted in seriousness.” McKee chimes in: “While it might seem fun and lighthearted and bright colors and funny messaging at times, it’s about lives.”

Perhaps the key to the student-run campaign’s success is its naturally sympathetic orientation toward its audience of peers. The FIWCI staff recognize that, despite their safety concerns, most students genuinely want to be on campus. They crave the richness of the college experience. “I want to make memories, I want to learn,” Schweitzer hears them saying. Many feel daunted by the difficulty of doing that under the peculiar and straitened circumstances. The FIWCI campaign — which, with school underway, has added to its social media messaging on-campus signage, all manner of swag, and even podcasts — has to communicate clear “tools, tips, and tricks,” as the staff routinely puts it, without boring its audience.

Not that the circumstances pose much of a boredom risk. Most everyone remains  on high alert, and the news seems to swerve almost daily. For a few anxious moments it looked like a ban might wipe out Tik Tok, which was a substantial platform for FIWCI’s messaging plan; how would the campaign adjust? (Tik Tok so far keeps ticking.) They continue to listen to focus groups and peers, asking them what they’d like FIWCI to address. They keep tabs on information coming from the CDC, and are also quick to incorporate updates from BU’s Student Health Services. Details are changing in real time. The campaign has to be nimble and responsive. Edgy, even f*ck, is appropriate.

It should be appreciated that not everyone is on board with the message. The objection is not that the campaign is profane but rather that it’s “deceptive,” as another student put it in a recent campus newspaper article about FIWCI: “To use the PR team and the campaign to kind of rally students into believing that now they have a responsibility and accountability is just not fair,” the student said, given that “students and faculty and staff did not have a say in the reopening plans.”

In this view, the campaign is a sort of cat’s paw, abetting the school in batting away the burdens of both messaging and compliance and placing them on the student body (literally). That the university approved and trademarked the FIWCI slogan could also be interpreted as deceptive: it’s student-created vernacular, but its usage and rights are controlled by the authorities.

The FICWI team is aware of the opposition to its campaign and encourages the dialogue it has sparked. They’ve simply and sensibly chosen to take up the work of helping students help themselves, which is essential regardless of one’s theoretical position on the matter. Whether by the campaign’s design or as an unintended result of its messaging, FIWCI has initiated a secondary, healthy, very important conversation: a debate (appropriate to a university setting) about power dynamics, collaboration and communication — and indeed about another kind of censorship that has to do not with profanity but with who is denied a voice at the decision-making table.

Still another issue of censorship was already under scrutiny at BU before FIWCI launched. On August 3, the school’s student-run Daily Free Press reported that faculty in its College of Arts and Sciences had received an official memo from the Undergraduate Academic Program Office asking them to “avoid references to the ongoing pandemic,” and to refrain from using certain vocabulary when discussing it with their students: not “f*ck” in this case but ordinarily innocuous words like “online” and even “value.” Controversy arose, with more accusations of deceptive practices — practices which appeared to continue when the dean who issued the memo, which had not been released to the campus as a whole (part of it was leaked to the Daily Free Press), did not respond to the paper’s request that he forward it in full.

A final item of note regarding campus profanity among official organs of communication. The FIWCI campaign isn’t alone in dropping F-bombs; something bluer than the sky seems to be in the collegiate air. This summer, the University of North Carolina-Chapel Hill’s administration was advised by county health officials (and ignored CDC recommendations) not to reopen its campus to students on its normal August schedule. The school did so anyway, and in less than a week viral clusters had formed in undergraduate dorms. 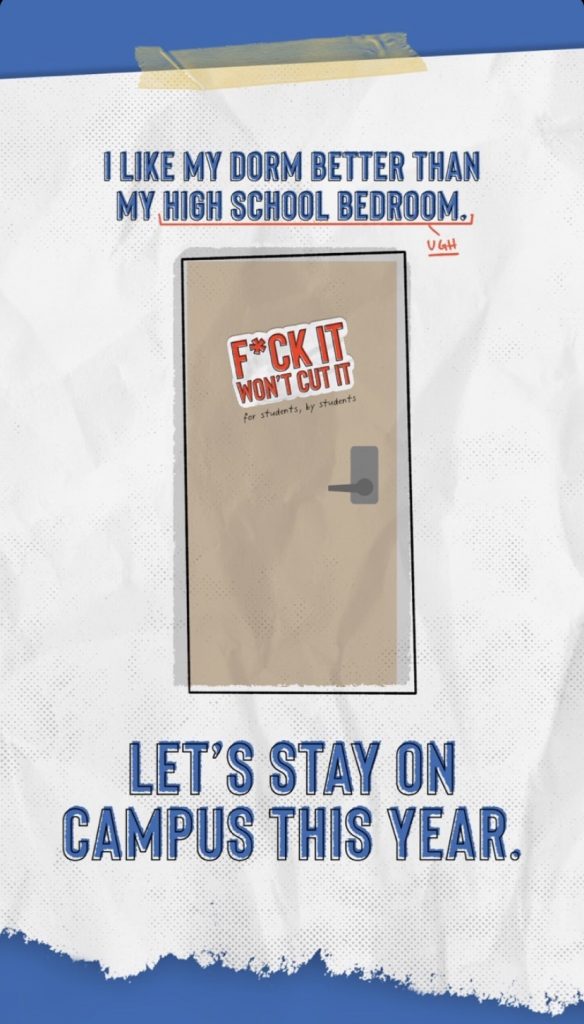 The following Monday, the student-run Daily Tar Heel‘s irate front page editorial was headlined, “UNC has a clusterfuck on its hands.” And just as the BU dean did not forward his memo to the student newspaper there, “the University [of North Carolina] has refused to disclose any additional information” about the outbreak, the Daily Tar Heel reported, “including the official number of positive cases, citing the Family Educational Rights and Privacy Act. But, don’t we have a right to know?”

Later that very day, the school announced that it was moving its undergraduate classes to virtual platforms and recommending that all students go home as soon as possible — an abrupt and confounding walk-back of its original plan. Correlation does not equal causation, as the saying goes; it’s likely that UNC had already moved toward or even confirmed a decision to do what it might better have done in the first place. But it was impossible not to notice the timing of the paper’s profane outrage: its own pointed use of that attention-getting word, in the same pandemic context as BU’s FIWCI campaign, albeit with much less compliant aims — and without the decorous asterisk. But whether college students are using it or not, there’s no doubt that they’ve reached the point of putting the U in F*CK.