In our first story about live theater’s adaptation to the present circumstances, we focused on Berkshire Theatre Group’s revival of Godspell, which opened in early August. The production was one of the first two since March to be greenlighted by Actors’ Equity Association (AEA), the professional union of American actors and stage managers.

Outside the scope of AEA jurisdiction, and far from the northeastern stronghold of the American theater, another production went well beyond adjusting to the crisis. A theater artist in Colorado Springs not only created a new play specifically for the moment, she founded a new theater company to produce it. And she might just have created a new kind of theater, as well.

The pandemic-driven catalyst for Theatre Across Borders and its inaugural production, Magic of the Marsh was a very different kind of performance. Melissa Law was scheduled to get married in March (and, incidentally, stop going by Melissa Law). The marriage happened, and she’s now Melissa O’Rear, but the wedding festivities had to be called off. So much for the rehearsal (dinner) and the performance (of vows).

That was a big disappointment, of course, but theater artists are adaptable even when they aren’t making theater. “It’s always been a dream of mine to start a company,” O’Rear told Adapt, one specifically geared toward family-friendly fare, and with a priority on “site-specific theater”: performances uniquely created for non-traditional theater settings. But the timing to pursue her dream had never been quite right — until March. Suddenly no one was doing theater, and the school where O’Rear teaches children’s theater was closed. Now she had time on her hands and capital in them: the unspent funds from her canceled wedding. Theatre Across Borders was born.

Along with it came its inaugural [production, Magic of the Marsh. O’Rear invited a collaborator, Tierra Izzo, to co-write and team-direct a piece designed, by necessity, for outdoor performance. O’Rear and Izzo began conceiving a nature-based fairy tale while they held virtual auditions. With so many area performers out of work, their casting call attracted not just an enormous quantity of talent but a wide variety, as well.

“We got actors we didn’t expect,” O’Rear says, including one for whom they wrote in a character called “The Beast” — “because we said, ‘We’ve got to have this guy.’” Thus not just site-specific theater but cast-specific, too. Their auditions also brought in musicians and a gifted puppeteer. And O’Rear cast as fairies some of her 11-year-old students from the school where she taught.

The result was an unanticipated piece of “devised theater”: a process-based approach O’Rear had practiced before with another company in Chicago. Artists collectively create a performance piece from scratch, often rooted in a single seed of an idea or theme. In this case, the theme was “growth and decay.” Magic of the Marsh, which was performed along a trail in a nature center, was billed as “an interactive theater hike, safe for the COVID-19 era.” 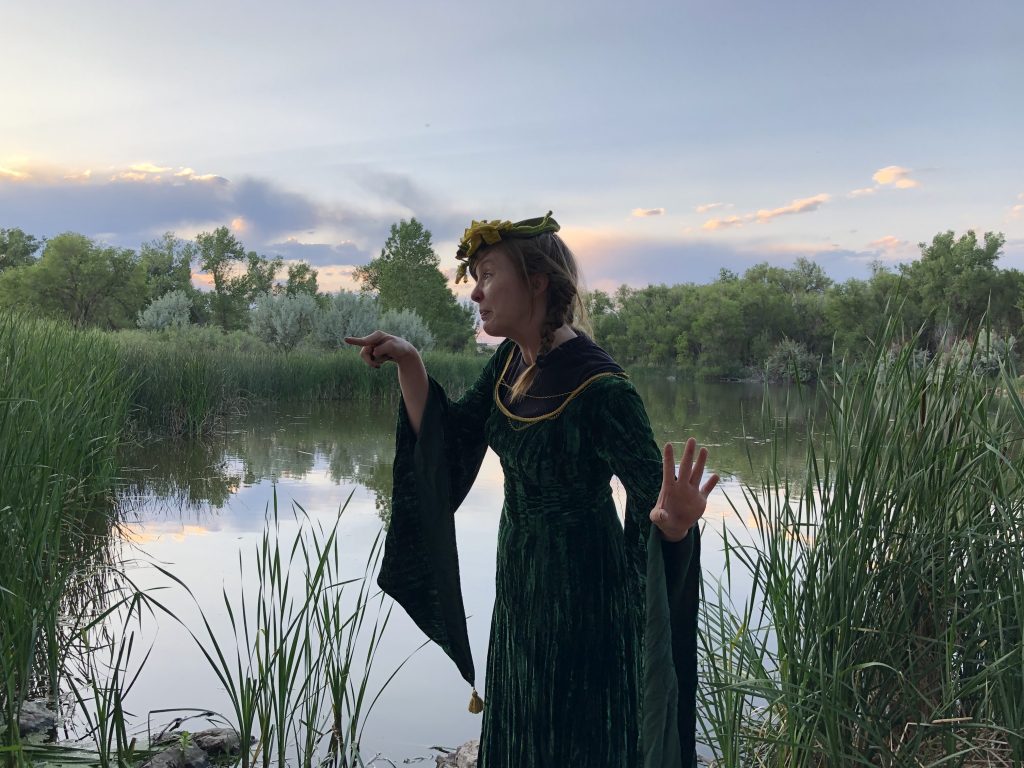 That’s right, a hike. With public gatherings were limited to 10 people by a temporary local ordinance, every 15 minutes, the next group of 10 would start down the trail and discover that, as the show’s marketing material put it, “a jealous witch has stolen the Neverflower, throwing off the delicate balance of the marsh and causing magical creatures to appear.” It was up to the audience to help restore nature’s equilibrium as they walked down the trail. As well as “devised theater,” Magic of the Marsh was also “promenade theater,” another long-practiced alternative form in which the audience moves all during the performance. (The smash Off-Broadway success Sleep No More, adapted from Macbeth, is a contemporary example of promenade theater.)

The interactive aspect of the show began as soon as people made reservations. Each party received a confirmation email that also included a description of the play’s scenario and the audience’s “role” as participants. To help vanquish the jealous witch, they would dance with the fairies, outwit a goblin, and so forth — all at a safe distance because, as a conceit of the play, the marsh characters had been affixed to their spots by the witch’s spell. That spell was also why the audience was required to wear masks: otherwise, their breath vapors might cause the poor creatures to “wither away.”

In other words, Magic of the Marsh was a pandemic play, but one that ingeniously reimagined real circumstances for a fantasy world. “The limitations of COVID made us even more creative with creating a story,” O’Rear says. “We had to write in why [the audience] had to wear a mask, and gloves; we had to write in why they had to be six feet apart. Why were the characters stuck in their places but the audience could move? Because there’s a spell cast on [the characters].” The adaptive dramaturgical thinking also owed to how quickly the piece was conceived and written: creativity sparked by external urgency as well as internal necessity.

Performances offered further fresh experiences. Because the show was limited to 10 spectators, all in motion down a trail, Magic of the Marsh could and in fact needed to be performed 12 times a day, at 15-minute intervals. The performers would repeat their scenes about every eight minutes — surely an unprecedented experience for the entire cast. And the environment itself kept folks on their feet in more ways than one. “We did have lots of encounters with animals,” O’Rear says. “Our puppeteer had to move away from a bull snake. And five minutes before we started [one day], there was a bear.” (Perhaps that is not quite so surprising when the performance venue is called Bear Creek Nature Center.) “I had a couple of crew members chase that bear for three hours to keep it out of the scene. The audience never knew the bear was there. ‘Forget about COVID, there’s a bear!’”

Every performance of Magic of the Marsh was sold out, and the production gained substantial media coverage. What began as a way to realize a dream to start a theater company, and to fill the circumstantial live-performance void (not to mention the void of a canceled wedding), turned into an attention-grabbing entrance for Theatre Across Borders. “We were not only surprised by the audience turnout but also by the community too,” O’Rear says. “Lots of newspapers wanted to see what was going on, and the local TV news came. People were really looking for something to do and there was not very much going on.”

O’Rear added that she was surprised by how avidly the two nature centers she presented with her proposal had leapt at the chance to host the production. Indeed, Theatre Across Borders has already been approached about doing more site-specific theater. “No one else is doing this around here,” O’Rear says. “This is probably our niche for now” — an unanticipated hybrid, she says, of site-specific, promenade, and devised theater. Perhaps a chimera is also the right form to take against the real-world affliction we’ve been under since March: rather than discrete forces working separately, a joining of them instead to combat an especially difficult witch who froze much of the world in place and upset its natural balance of growth and decay. And as the fledgling Theatre Across Borders exemplifies, maybe the best way to react to widespread worry that something ancient and beloved might die off is to give its species a newborn.