Probably no art form has taken a bigger hit this year than live theater. The music can play on(line), painters can keep painting, and so on, but dark theaters mean a nearly complete seizing up of the entire industry of theater. That was why Actors’ Equity Association (AEA), the national labor union of theater performers, was quick to set up a relief fund for its members in March.

Adaptive variations for video have yielded engaging and even unprecedented experiences; but in the axiom of the gifted dramatist and teacher Sherry Kramer, “the play takes place in the audience.” The protean energy created by the performers on the stage remains nebulous and notional until it finds its form in the house, whose composition and character change every night. No two performances are ever alike, and it’s the audience that guarantees this uniqueness — that makes theater theater.

In March, AEA urged theaters to postpone productions already in rehearsal and did not approve any further shows involving its members, essentially shutting down the big-league season, as it were. Union houses were deathly quiet for months, and nearly all other productions were also mothballed. Two Equity shows were finally approved for July, both in Massachusetts, where the pandemic has been less severely felt relative to most of the rest of the country. The first was a one-man show performed under a tent outdoors: a sensible reduction of risk for everyone involved (mainly by involving only one actor); but art of any kind has difficulty thriving when it plays itself safe. Adapting to the circumstances isn’t the same as conceding to them.

The solution implemented by the other AEA-approved production was riskier — not to anyone’s safety or health, but to the art form of theater itself. Instead of shrinking with and from the limitations, Berkshire Theatre Group’s production of Godspell embraced them. 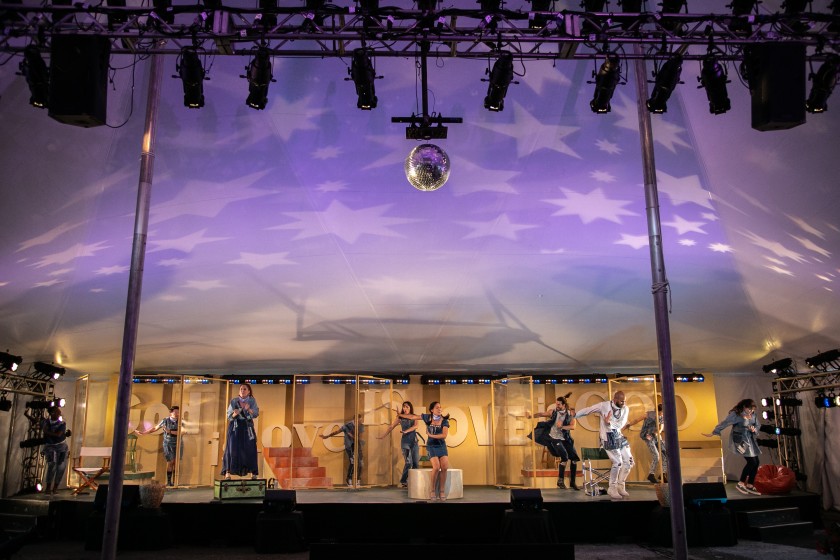 The oft-produced 1971 musical may not immediately strike anyone as theater for unusual times, but Berkshire Theatre Group’s (BTG) choice to revive Godspell was canny for a number of reasons. One, of course, is the show’s long-lasting fame, which makes it an instant hit virtually wherever and whenever it is staged. Another is that Godspell has a history of accommodating and even benefiting from modifications, including its own composer’s 1992 revision of one of the lyrics of one of its songs to incorporate a response to the horrifying police beating of Rodney King. And the show’s content is readily applicable to our moment: It tells, in the words of the Los Angeles Times‘ recent preview of BTG’s production, “the story of 10 people whose lives are in chaos, and their search for community through love and understanding.”

After BTG’s initial request was turned down by AEA, the producers resubmitted an expanded proposal: a 30-page protocol which promised, for example, that throughout the rehearsal period the entire cast would isolate in the same house and have their noses swabbed three times a week. But it was the measures taken on the stage itself that made BTG’s show a truly adaptive one. The proposal also included, as a byproduct of its pandemic-driven protocols, elements of design and direction that which changed the very image of Godspell. For example:

The production was staged (by AEA mandate) outdoors, under a tent, but it took the precaution further: different playing areas onstage were separated by plexiglass shields. This partitioning gave the play a unique visual stamp.

Performers carried masks in their pockets; at appropriate moments, they put them on.

Performers never touched one another. When was the last time a piece of theater went from start to finish with no physical contact between performers?

Choices like these — necessities in all but name, innovatively implemented — had such a strong influence over BTG’s conception of Godspell that the production wound up being explicitly set during the pandemic, i.e. right now. (“Lives in chaos” indeed.) And the audience participated in this contextual revision: the theatergoers themselves had to have their temperatures checked when they arrived; they had to wear masks during the show, too; and instead of receiving a printed program, they found the playbill on their phones.

The BTG production of Godspell was a reminder that a piece of theater can take almost any shape. A play can be removed from its original setting and placed in an entirely different one. It can respond to rare circumstances and make that rarity resonate thematically. It can leap 50 years into the future from its origins and speak directly to our moment. It can take place in any and every audience. In our next look at adaptive theater, we’ll see how it can also work the audience directly into the play.