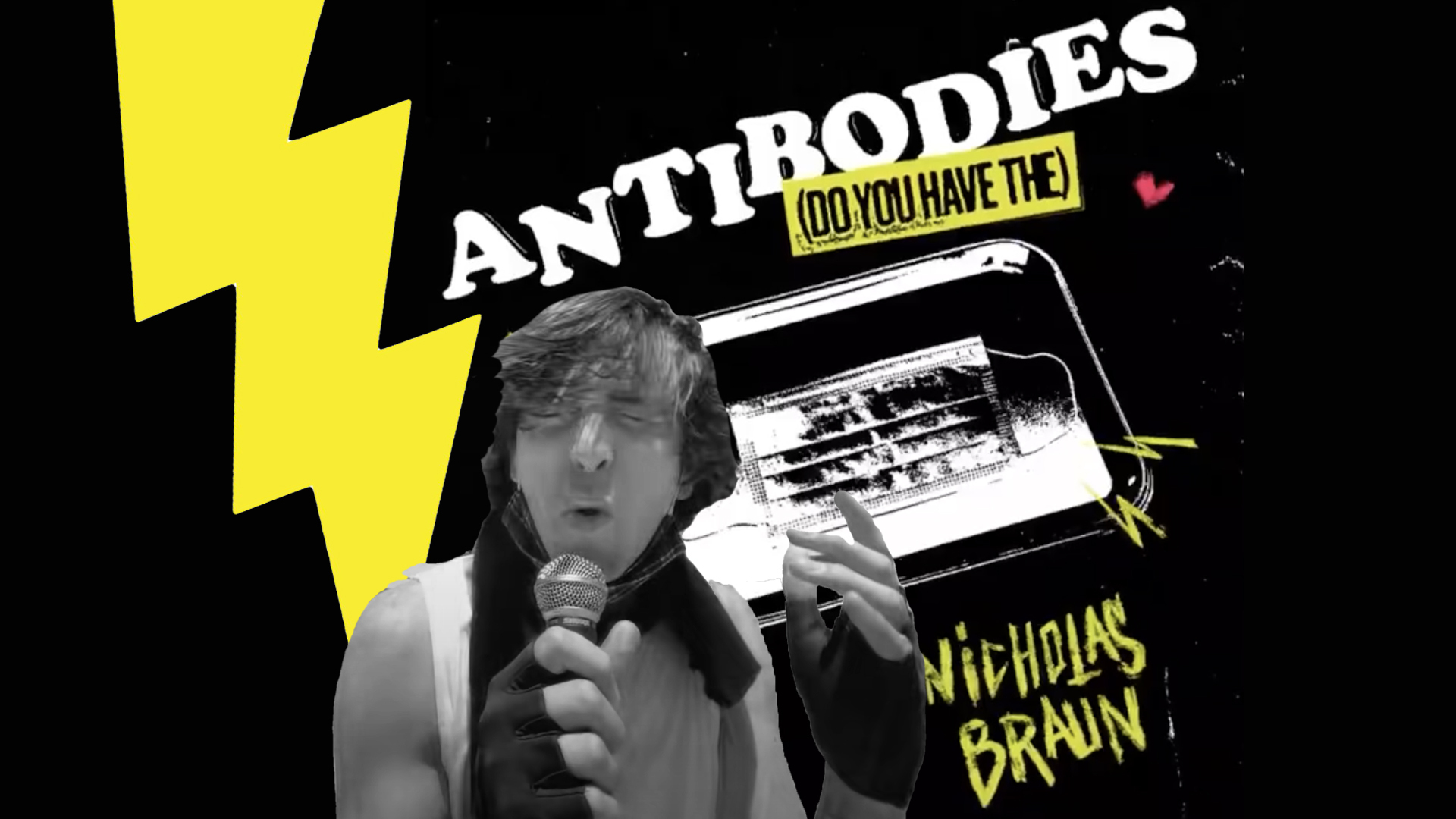 I Sing the Antibody Electric

An actor gives us the anthem we need

A pandemic needs an anthem: to raise morale, awareness and even funds. Thanks to the actor Nicholas Braun, 2020 now has one, but it would take only a few minor lyrical changes, and very slight squinting at the video, to interpret the tune “Antibodies (Do You Have The)” as an AIDS-awareness song: “a girl who is safe,” “pants off”; lube (here, sanitizer), a tube of blood.

Of course, you’d also have to go back in time, but then, who wouldn’t like to do that these days? If you set the destination for the year of Back to the Future, 1985, the DeLorean’s gull-wing doors would spread open and the first sound you’d be likely to hear might well be the thump-and-grind of a post-disco anglobeat and a Brit belting out the command, “Relax! Don’t do it!” Looking around, you’d almost surely see a tenth-grader wearing an oversize white t-shirt bearing the boldfaced, all-caps, billboard-scaled letters FRANKIE SAY RELAX. As a visitor from 35 years ahead, you might not understand this AIDS-era code, but everybody around you would: HIV. Keep calm and condom on.

An interesting detail about “Relax”: the international hit by Frankie Goes to Hollywood–one of the few openly, even brazenly gay musical acts of its time–was not written with an AIDS message in mind. The lyrics were in fact so dangerously salacious that the song was banned in Britain for a while, which naturally guaranteed its popularity. But its very concupiscence during the height of the AIDS crisis was what associated “Relax” with the epidemic; over time, it became a kind of musical PSA “about” the disease, if not exactly crowd-sourced then certainly crowd-heard.

Crowd interactivity is something else “Relax” has in common with “Antibodies (Do You Have The).” This past May 7, Braun, an actor best known to many as Cousin Greg from HBO’s Succession, had masks and music on his mind. He “made a call to the wild” (best known to many as social media) with an idea for a song–really just the title line and its eight-note melody, which he blurted out like an English postpunker of the same early-1980’s vintage that spawned Frankie Goes to Hollywood: “Do you have the antibodies?!” he called to the wild, in a faux British accent.

“And the wild,” Braun discovered, “called back.”

Braun told Variety, “Within ten minutes, someone had sent me a version on their keyboard.” That was followed by a wave of other extrapolations from Braun’s original prompt: rock, pop, soul, folk. Taking note of the phenomenon Braun had created, an Atlantic Records executive offered him the opportunity to record an official single. Braun’s studio version of the song was shaped from the wild-foraged result of his call, and given professional sheen by producer Colin Brittain, whose resume includes Dashboard Confessional and Papa Roach. Stuff cotton in your ears and it sounds a little like Weezer if Rivers Cuomo woke up in a rare great mood. The accompanying video, shot with almost guerrilla haste, is an appealing dorky-sexy goof, pitch perfect for the tune and its message.

Unlike Frankie Goes to Hollywood, Braun conceived his song with the era’s pandemic in mind; but like “Relax,” the crowd helped make the result what it is. Braun, in turn, has donated all proceeds from “Antibodies” to COVID-related charities, including one aimed at the Navajo Nation, which has been hit especially hard by the disease. It might be worth noting that the crowd may also have helped make the musician what he is, if indeed he becomes one: Braun, who until now had never made a song in his life (although his brother is a musician), has already been approached about doing further recording.

The last few months have been gloomy, claustrophobic and fractious. We could all use a good time, not least because the best way to get people to do something good for them is to make it sound like fun, too. And that’s the double-dip of “Antibodies (Do You Have The)”: it gave stuck-at-home musicians an enjoyable diversion; and it gave the prevailing safety-first mandate a comically sex-positive vibe. That’s not to say everyone will run out tomorrow with masks on and get tested. But if it’s true that no one wants to be part of a revolution they can’t dance to, then it surely follows that any successful movement has to have its own singalong. And like Frankie’s, Braun’s has a t-shirt, too.