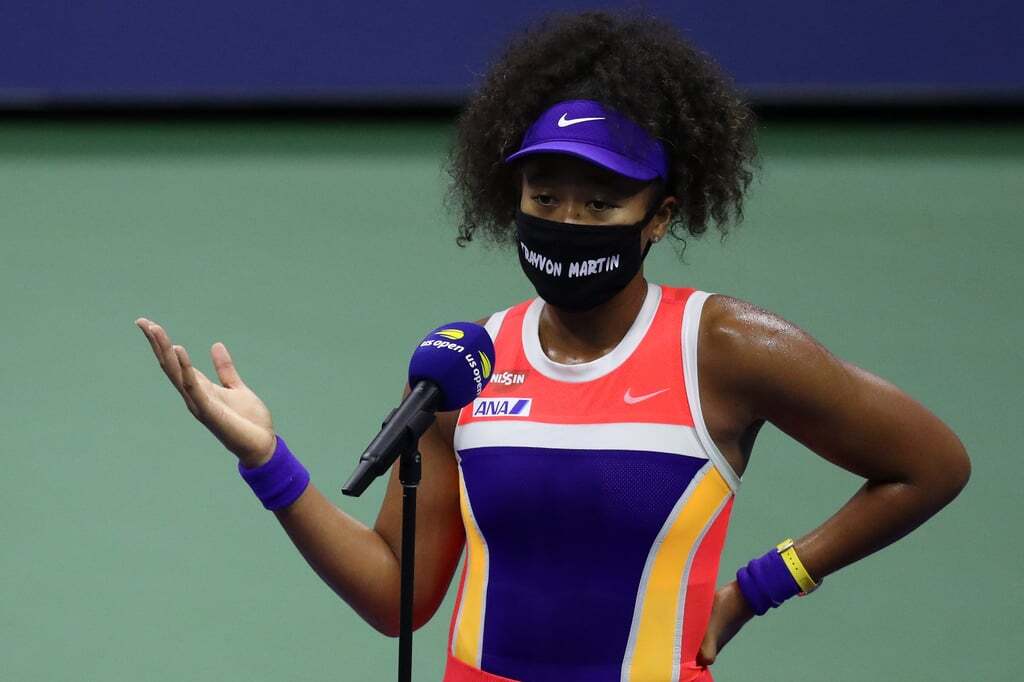 Naomi Osaka puts the ball in our court

Unpredictable times call for unpredictable messaging, and therefore unpredictable messengers. Over the summer, with sports on hold, athletes moved to the forefronts, and sometimes the battlefronts, of other realms. They quickly became powerful agents of cultural and political change in ways that have been bold, exciting, and at times unsettling. The old scold “stick to sports” has always expressed an implicit denial of athletes as complex people—a fear of what’s under the mask, so to speak. So why are so many players not sticking to sports now? Black Lives Matter was founded eight years ago. White men with power, privilege and weapons have been bigoted oppressors and killers, throughout American history.

A possible, partial explanation is an unexpectedly liberating side-effect of the pandemic. First it liberated athletes from playing—most to their dismay, it should be allowed–and afforded them some attention for non-sports matters. Then, when Major League Baseball and the National Basketball Association announced that their seasons would begin (in the NBA’s case, resume) in late July, every player shared the individual responsibility to decide whether or not to play under uncertain safety conditions. Some players, including a few stars, elected to sit out until 2021. The choice not to play wasn’t explicitly political, although the pandemic (like virtually everything else in American today) was quickly politicized by both sides of the blue-red divide. Yet these initial resistors had the effect of preparing the ground for subsequent actions taken by athletes with deliberately political aims, in numerous major sports. We’ll look at some of them over a few posts, starting with tennis.

In April, Roger Federer suggested publicly that the pandemic presented an opportune moment to merge, at long last, the men’s and women’s tours. The Association of Tennis Professionals (ATP, whose membership is male-only) and the Women’s Tennis Association (WTA) participate in the same tournaments and are functionally indistinguishable to the broader public, but they are entirely separate organizations. Since their independent formations in the early 1970s, there have been calls to combine the tours, not only to unify and optimize operations but also to provide more fully and equitably for its players, most of whom—unlike the stars we usually see on television—aren’t anything like multimillionaires. The worldwide tennis shutdown threatened their solvency. A merge might also accelerate the slow progress of putting the sport’s women on equal footing with men. Thus Federer’s suggestion had implications much more political than merely seeking a notional “unity.”

Those implications seemed to threaten some of his own peers, who offered nothing like unilateral support for his proposal even as they themselves went rogue from the ATP. Some male players participated in a June charity tournament organized by Novak Djokovic, the men’s reigning No. 1 player for most of the last decade. The inaugural Adria Tournament, which was played in venues in and around Djokovic’s native Serbia, was unsanctioned by the ATP. Numerous players contracted coronavirus during the tournament, including Djokovic—who then, in August, unexpectedly announced the formation of a breakaway players’ association. Its mission, in the words of Djokovic’s primary partner in the venture, is “to unify the players, have our voices heard & have an impact on decisions being made that (affect) our lives & livelihoods.”

This language seemed to respond to Federer’s call for a unified, player-driven tour, but the new Professional Tennis Players’ Association is for male players only. Not surprisingly, Federer objected. But the disagreement has a productive possibility. It reopens a long-simmering discussion, reveals schisms that need to be understood in order to make progress, and may eventually help achieve a healthy merger of the ATP and WTA. (A similar case could be made, mutatis mutandis, for America’s two dominant political camps, which have grown so hardened in place that they might benefit from a breakaway but respectable third party in order to resume civil discourse and pursue a collective patriotism.)

Perhaps more pertinently, the divergent agendas of Federer and Djokovic allow us to see athletes as more than just specimens of sport but as the individuals they are, with unique characters, motives, politics and needs. Such expanded awareness allows us to appreciate the complexity of a player like Naomi Osaka. In August, the two-time Grand Slam tournament champion was playing in the Western & Southern Open (relocated this year from its Cincinnati home to the US Open’s site at Flushing, Queens), where she had advanced to the semifinals. After Jacob Blake was shot and paralyzed by a policeman in Kenosha, Wisconsin, Osaka announced that she would not play her semifinal match as scheduled. “Before I am an athlete, I am a black woman,” she Tweeted. “And as a black woman I feel as though there much more important matters at hand than watching me play tennis.”

Among the implications in that statement was that watching a star tennis player not play tennis—and in a tournament she was a mere two matches away from winning—might itself be one of those more important matters. And note, too, that Osaka’s language was not  the expected “more important matters at hand than playing tennis.” She said, “watching me play tennis.” That subtle revision of the received phrase made Osaka’s protest about what all of us were doing, which set the stage for subsequent messages she would send. Overall, her conspicuous absence galvanized attention toward her goal to “get a conversation started in a majority white sport.”

The first official response in the conversation she started was the tournament’s postponement of the next day’s entire slate of matches. That was a testament to the importance of Osaka’s presence and the extent of leverage in protesting. After the tournament resumed, it finished with another twist: Osaka strained her hamstring during her semifinal victory and had to forfeit her final match against Victoria Azarenka because of the injury. That unexpected ending—Osaka missing another match, but this one unwillingly—both complicated and intensified her politically motivated withdrawal three days earlier. The action on the court and off, her personal health and her political protest, became interlinked.

Just days after the Western & Southern Open concluded, Osaka returned to action for the US Open with politics still on her mind—and on her mouth, literally. The Black Lives Matter logo has appeared on many athletes’ warmup gear this summer, but Osaka took the message further: throughout the US Open she wore masks bearing the well-known names of murdered black Americans. The pointed symbolism—covering her very mouth with the names—was impossible not to notice, and so was Osaka’s sense of history, even though she turns just 23 next month: one of the names on the masks was that of Trayvon Martin, whose killing in 2012 sparked the formation of the Black Lives Matter movement.

Osaka’s protests have received all this attention not merely because she is a tennis player. She’s a great tennis player. As Robert Scoop Jackson puts it in his new book The Game Is Not a Game: The Power, Protest, and Politics of American Sports, the most prominent political voices in sport “are able to stand on what they stand for openly due to their history of winning and continual ability to win.” This is true at the psychological level of hero worship—we invest LeBron James with his sociopolitical authority off the court because his greatness on it powerfully captivates us—and also on the surface of sheer exposure. Osaka generally lasts deep into tournaments; like James, whose teams regularly play until the last week of the postseason, she is able to hold court longer than most of her peers. And not only able but newly motivated. After the US Open, she tweeted: “All the people that were telling me to ‘keep politics out of sports’ (which it wasn’t political at all)”—it has been personal for her all along, she reminded her followers—”really inspired me to win. You better believe I’m gonna try to be on your tv for as long as possible.”

Osaka had just made good on that mission by reaching the US Open finals, where her opponent was again Victoria Azarenka. This time, Osaka, wearing her planned seventh mask in seven matches, was not only healthy enough to play Azarenka but beat her; the victory consummated, on a longer arc, what had started at the Western & Southern in August. Immediately after the last point of the match, Osaka lay down on the court in eerily quiet, fan-free Arthur Ashe Stadium—the bizarre and uncomfortable setting of nearly every sporting event this summer—and spent a few moments staring at the sky, collecting herself for the obligatory post-match interview. In it, she was asked about the intended message of her seven masks. She fixed the interviewer with a look and said: “What was the message that you got? […] The point is to make people start talking.”

Much was made, rightly, of the instinctive canniness of that response—but didn’t another answer Osaka gave, less charged and more subtle, show an even deeper anticipatory awareness? Asked why she lay herself down on the court right after beating Azarenka, she said: “I always see [the champion] sort of collapse after match point,” she said, “but I always think, you may injure yourself, so I wanted to do it safely.” Osaka showed extraordinary presence of mind, literal seconds after winning the US Open, following two weeks fraught with challenges physical, emotional, competitive, personal, and political.

Surely Osaka did not intend her response to the question to invoke our greater concerns with safety in America, from threats viral and violent; but when an actor on any stage is truly one with her character, as Osaka clearly is right now, the message transcends the dialogue. Osaka understood the essential nature of story and message, summed up by a master of another spectator sport of a sort, theater, which we wrote about recently: “The play takes place in the audience.” With all the attention on Osaka, her humanity and her message, she volleyed it back to us. She told us who she is by asking us to talk about who we are.

After Osaka’s quarterfinal victory at the US Open, interviewers showed her taped messages of gratitude from the parents of Trayvon Martin and Ahmad Arbery for wearing masks in their sons’ honor. Asked what the videos meant to her, Osaka revealed herself yet again in another message that was, paradoxically but characteristically, not about her. She said: “I feel like I’m a vessel.”