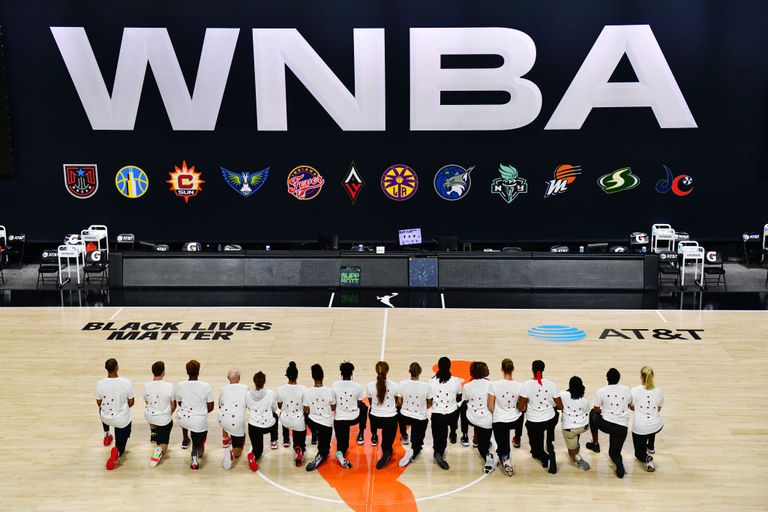 Recently we wrote about Naomi Osaka’s ascendance, not only to triumph at the US Open but to the podium of our national discourse.  Osaka is the most prominent figure so far in a late-summer phenomenon of athletes refusing to stick to sports (while, in her case, also sticking so hard to sports that she won the US Open—take that, haters). The impact she made was strengthened by what others were doing—especially on a single day, August 26.

That was the date of Osaka’s scheduled semifinal match at the Western & Southern Open (which immediately preceded the US Open). She announced that she would not play in protest of the shooting in Wisconsin of Jacob Blake, leading the tournament’s officials to postpone the day’s entire slate of matches. The same night, athletes across sports also sat out. Some of these actions were motivated by, and seemed limited to, the attack on Blake, but others, especially in the WNBA, had deeper roots, and larger ramifications.

Before the WNBA’s season began in July 25, the league announced that its marketing campaign would include a substantial Black Lives Matter component. Messaging included the words Black Lives Matter emblazoned onto the hardwood courts and on warm-up t-shirts worn by players throughout the league. The league also created an empowering “Social Justice Anthem” promo.

These official efforts set the tone, but an exclusively player-driven action, unplanned by the league, raised the stakes considerably. On the evening of August 26, the WNBA’s Washington Mystics emerged from their clubhouse for their game against the Atlanta Dream. Instead of the league-approved Black Lives Matter shirts, the Mystics were wearing white t-shirts over their jerseys. Each shirt bore a single, large letter; when the players stood in a line, they spelled J-A-C-O-B  B-L-A-K-E. The back of each shirt was painted with seven blood-red bullet holes, the same number of gunshots a police officer fired at Blake, paralyzing him. Both teams’ players linked arms and took a knee during the national anthem. Then they walked off the court.

“Before I am an athlete, I am a black woman,” Osaka had said earlier that day, when she declined to play her tennis match. Mystics guard Ariel Atkins bookended Osaka’s statement: “When most of us go home, we still are black,” Atkins said. “We’re not just basketball players, and, if you think we are, then don’t watch us.” That night, the Mystics and the Dream made sure no one could–and so did the entire WNBA. Every player on every team scheduled to play that night left the court before their games could start. None were played.

Measures like this are drastic, and they may seem rash. But just as the shooting of Jacob Blake wasn’t an isolated incident, nor was the WNBA players’ action a spontaneous protest. Their struggle against racial injustice and oppressive power has a history that goes at least as far back as 2017, and it was galvanized again before the 2020 season even started. In early July, Georgia’s junior senator, Kelly Loeffler, who is white, sent a letter to the WNBA Commissioner’s Office denouncing the league’s Black Lives Matter campaign. Loeffler also happens to be one of the two owners of the Atlanta Dream–who are, ironically, named for Dr. Martin Luther King’s iconic “I Have a Dream” speech.” (King was born in Atlanta.) Political conflict collided with economic conflict of interest.

More conflict of interest: Senator Loeffler was appointed to her seat—the first political position she has ever held—in January of this year by Georgia’s Governor, whose narrow and controversy-fraught victory in his gubernatorial race in 2018 was plagued with allegations of voting rights violations (and followed by a lawsuit supported by his opponent). Loeffler, a business executive, is estimated to be worth about $500 million along with her husband, who is the Chairman of the New York Stock Exchange. In April, Loeffler came under scrutiny for having sold off $20 million worth of stock after she attended closed-door briefings about the shutdown’s potentially devastating effect on the market.

It would be hard to overstate the size and scope of the advantages someone like Loeffler enjoys. She possesses both financial and political power beyond most people’s wildest imaginations of either, let alone both; and she is co-owner of one of the franchises in the very league whose marketing practice she protested in ink—with senatorial leverage ready to hand, even though she has never run for any office. Loeffler has, in effect, no voter constituency to serve and no political mandate outside her own interests and ideology.

Facing this mismatch against an almost totally unchecked opponent possessing virtually limitless resources, including the strings of the purse from which their salaries are paid, the Dream (and the entire WNBA) had few defensive options. The strategy they chose was, like Naomi Osaka’s, forceful by the exercise of paradox: they fought back in one game by refusing to play another. The players recognized that their true and absolute power lay on the court itself. They can, and did, bring the entire machinery of their sport to a standstill by simply not feeding themselves into it. We tend to take sports for granted: no matter what happens, games get played. When suddenly they don’t, we see just as suddenly that it’s the players, and no one else, who decide.