Unassailable evidence of a historic life: your name is synonymous with what you invented. By that definition, Rube Goldberg has bragging rights over even Thomas Edison and Benjamin Franklin.

You can say “Rube Goldberg,” or you can say: “An overly complicated machine that does a very simple task.” The latter is a useful definition of his name supplied by Goldberg’s granddaughter, Jennifer George, who oversees his work’s legacy. Somewhere between them is New Yorker writer Adam Gopnik’s description of what he calls “Goldbergism”: “elaborate machination to no particular point.”

It would be worth recalling that in addition to bequeathing his name and innovation upon humanity, Rube Goldberg was also a cartoonist. In fact, he won the Pulitzer Prize in 1948 for this one, which bears some resemblance to one of his contraptions: 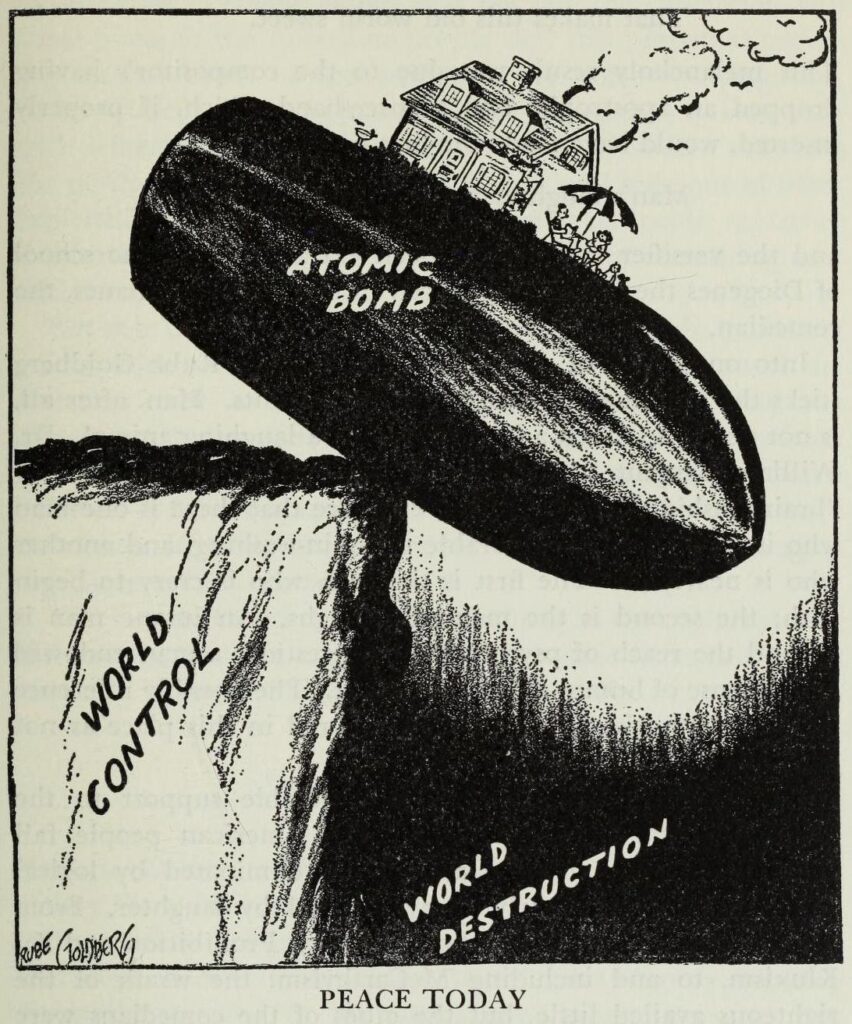 So maybe not so fast on “no particular point” (or “simple task”). Sheer pointlessness and complication, no matter how entertaining or impressive, don’t last. What does is having something significant to say about and to your world and the world to come, and that may explain not only why Rube Goldberg is in the dictionary but also why we still make machines in his name, sometimes despite our best intentions. Whenever we go to great but convoluted lengths, there he is, waiting for us at machine’s end, wise to our folly.

Still, there is something fun and rewarding in the pursuit of frivolity for its own sake. An example is the official Rube Goldberg Challenge, which has been held annually since 1987. Each year, the contest sets a task for its contestants. The task for 2020 was originally announced as “Turn Off a Light.” (The recent trend has been toward simpler, less topical challenges, in both logistics and language: 2009’s mouthful, “Replace an Incandescent Light Bulb with a More Energy Efficient Light Emitting Design” was much lengthier and more partial than the everyday-yet-timeless tasks of recent years, like “Erase a Chalkboard, “Zip a Zipper” and “Hammer a Nail.”)

When the pandemic struck, rather than cancel the contest George moved it online and accepted video entries. “As schools were shutting down it became very clear to me that we had to provide something,” George said: “a fun distraction that the whole family could get involved in.”

She also decided to change this year’s challenge to make it more contextually immediate. A couple of obvious candidates had, surprisingly, already been used in previous contests: “Dispense an Appropriate Amount of Hand Sanitizer into a Hand” (2010) and “Select, Mark and Cast an Election Ballot” (2004)–helpful reminders that the faces of society’s problems may change but the problems don’t. Thus when the 2020 contest replaced “Turn Off a Light,” it echoed 2010 with “Drop a Bar of Soap into Someone’s Hand.”

The challenge was met by about 450 entrants from 39 US states and a dozen countries. The volume of submissions was “more successful than we ever imagined,” George said, adding that “a lot of people [wrote] us that it really helped them get through this period of quarantine.” It seemed somehow appropriate that in this year of America fumbling matters of basic safety and health (like bars of soap), the winning entry came from a family in Canada. Upstairs-and-down and over-and-around the contraption went, propelled here by a spinning turntable, there by a vibrating cellphone: the charming, hugely creative and enjoyable waste of time in design, construction and execution we’ve to come to love in a Rube Goldberg.

The benefits of this year’s Challenge were many. For kids, it was a useful diversion while there was no school and few opportunities to get away from home; for the adults, a chance to get some work done while the kids were occupied (or a chance to ditch work and help out with the Rube Goldberg). It’s also true that making things more complicated than they need to be provokes the mind toward the kind of elastic, complex thinking that is especially invaluable in times of crisis. And with so many people feeling blue or anxious, a dose of goofy Goldbergism surely lightened the mood. But there is surely something deeper at work here.

In a time when efficiency is, more than ever, the watchword of business (and much else in life), we tend to make beelines toward whatever seems to offer the most streamlining and waste the least energy. But there are two hidden dangers implicit in efficiency. One is that a narrow operation will almost always produce a narrow result; the other is that to make our (efficient) beeline for that streamlined operation is to risk zipping right past other ways that could actually work better, and possibly even more efficiently.

But is “efficiency” what we ought to prefer in the first place? There’s plenty of research and writing that suggests otherwise; chances are you’ve read or heard about the creative benefits of a certain amount of inefficiency. It probably isn’t necessary to explain why daydreaming, tinkering, trying all the options, and adding rather than subtracting can contribute to better solutions. Nor does it require much attention to see that inefficiency is built into our democracy and is moreover a huge part of what safeguards it: multiple branches of government, checks and balances, and the sometimes cacophonic voices of our wide diversity have their invited say in how the country proceeds; our unum relies on our pluribus, and our pluribus is written into our Constitution.

In other words, inefficiency can do more than build better mousetraps. It can also foster richer experience and a broader society, often by surrounding the signal with a certain measure of noise. For example, you don’t go to the grocery store in order to find new music, but maybe, while you’re shopping, you hear a song you like. You’ve discovered something you didn’t know, broadened your world, and found an unexpected pleasure (and maybe a new favorite band). As the computational political scientist Sarah Shugars points out, “like the pop song you learn [about] at the grocery store, inefficient environments lead to exposure to topics you wouldn’t explore yourself.”

Shugars points to the other side of this experience: a “highly efficient media environment” that clears the way toward signals to which we’re already tuned. Over time, and especially since the advent of the internet, we have evolved away from , for example, the old network TV days and its succeeding (quantitatively but not qualitatively different) cable-box era. Now we can forego the flipping and navigate directly to a program we have already decided to watch without bothering to wade through the other choices. That seems like an improvement, and in some ways it certainly is; but the value of inefficient broadcast television and the mechanical, up-and-down Goldbergian procedure we call channel surfing was that it exposed viewers to much more variety. If you couldn’t find a good sitcom, maybe you watched the news; and maybe when you watched the news, you learned something.

The benefit, then, of an essential communication environment like social media is accompanied by a danger. Scrolling through a crowded Twitter feed is very inefficient, but it can supply us with what political scientist Markus Prior calls “by-product learning.” We find all kinds of information, delights, and much more that we would have missed if we’d just gone straight to @MyFavoriteTweeter. On the other hand, if we overtighten the feed, slough off too many Facebook frenemies or off-topic Instagrammers, and keep only essential personnel and likeminded accounts around, we end up in a media environment so efficient that it turns into an echo chamber, a vacuum of confirmation bias, and our world becomes not only tiny but badly distorted.

Inefficiency may also be a key to more than one-way communication (e.g. what beams at us from the boob tube). Going the Goldberg way can foster improved collaboration with our colleagues. “Intuition seems to indicate that efficient information sharing would be good,” Shugars writes, “allowing a group to seamlessly coordinate. But, there’s also some indication that inefficiency is better–encouraging more exploration and therefore a more diverse set of possible solutions. The risk is that a group with an efficient communications network will actually converge on a local optimum–taking the first good option available, rather than taking the time to fully explore for the global optimum.” And what better sums up a Rube Goldberg invention than the observation that it scrupulously, even obsessively avoids taking the first good option and goes, in the words of the great playwright Edward Albee, “a long distance out of the way in order to come back a short distance correctly”?

Inefficient communication can also be a means of connecting to an audience–not always, and perhaps not even often, but in certain situations and moments. Adapt has covered at least two recent examples of “by-product learning” which were set apart from most by deliberately building the by-product into the product.

The first example was what we called “The Steak-umm Effect.” Back in the spring, the frozen-meat purveyor began loading its Twitter feed with sociopolitical commentary on intelligent data-gathering, critical thinking, rational decision-making, civic broadmindedness and other pandemic-appropriate issues during a time of unprecedented chaos and conflict. For weeks, Steak-umm’s account uttered scarcely a word about its actual product or even the fact that it made one. The effect was not only to broaden the awareness of Steak-umm’s followers, giving them way-off-brand but very useful (and calm) thinking about the urgent matter at hand, but also, finally, to broaden their awareness of the brand itself: the strategy indeed helped sell product. (Steak-umm’s Twitter feed continues to push its Enlightenment-influenced messaging.)

The second example is the more recent formation of the Civic Alliance, a 185-member group of companies who have organized a varied campaign around the pressing issue of voting access, rights, and education. Like Steak-umm, the Alliance has extended its normal discourse into a place one wouldn’t expect it to go; additionally, it has diversified the messaging via a multitude of voices in its mix, from the Atlanta Hawks to Zillow.

We might call both of these efforts inefficient. They don’t directly (and only barely indirectly) advertise product, and in the case of some members of the Civic Alliance their voting initiatives are costing the companies a good deal of money for no immediate financial gain. It seems instead that they are playing a longer game, and a more elaborately designed one, that borrows unexpected elements and travels over what Shugars calls “the bumpy solution landscape.” Civic Alliance participants may achieve the ultimate end of profit-making partly by appealing to and cultivating audiences who are, like educated voters, likelier to make well-informed decisions, essentially by piping in unexpected, rock (the vote) music while they’re shopping for something else. Building that kind of relationship is a much slower way of doing business, but it may result in stronger and longer brand loyalty.

And that brings us back around to Rube Goldberg. One of the young contestants in this year’s Challenge was asked what he learned from making the contraption he submitted. “Patience,” he answered, “is key.”

Adaptation, Revelation, and the Cartography of Belonging

The Shortest Story Ever Told?

The Data of Physical Spaces

New Adult Is The New Black