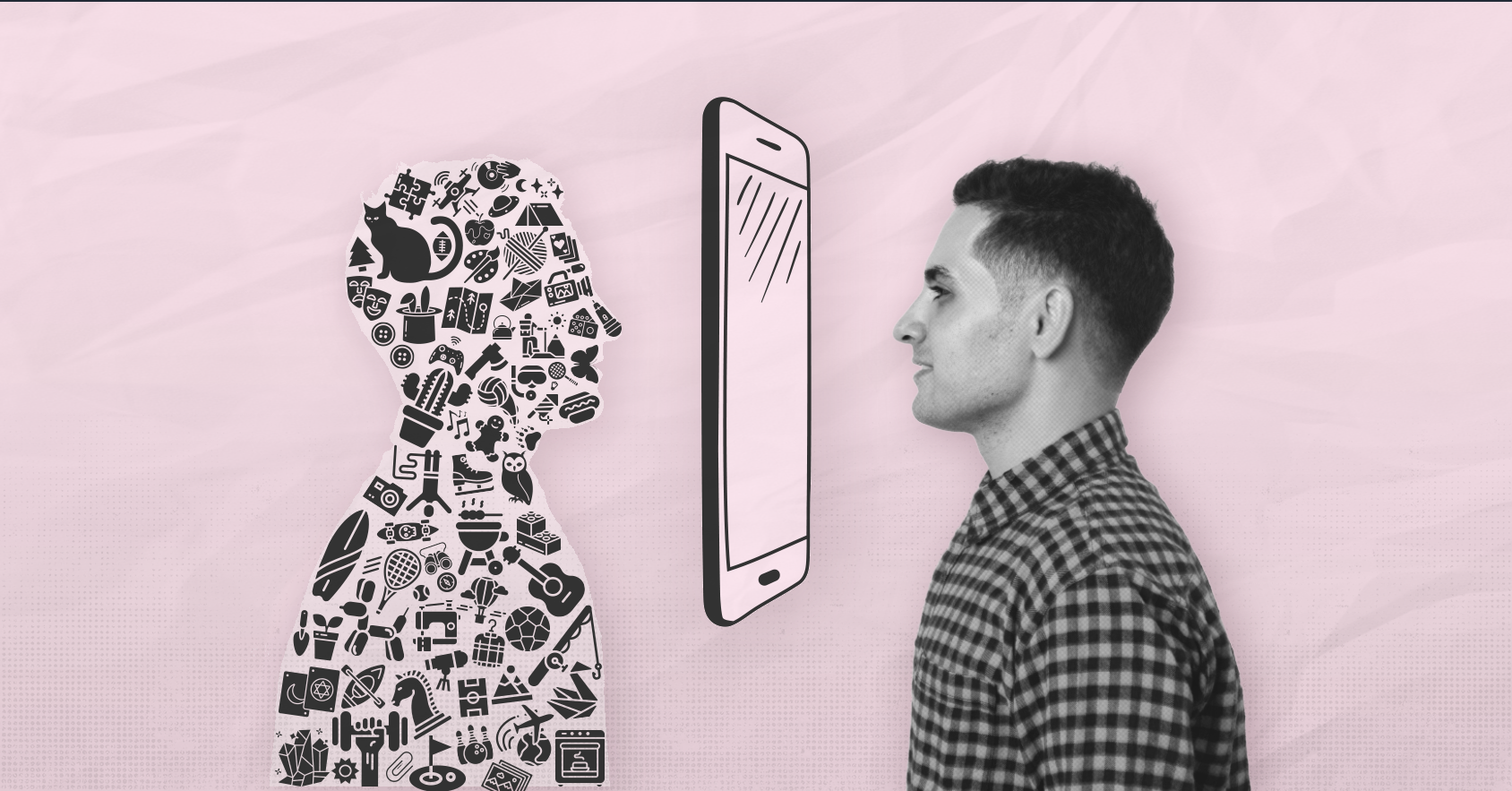 The app reflects back at you glimpses of an inner self you might not know.

Two years ago, when I downloaded TikTok, I had no idea what it was. I’d heard faint whispers of it between friends, noticed that it was somehow controlling the Billboard 100, and caught glimpses of the peppy teenagers doing goofy dances while recording themselves in public.

It’s a lot to give to an app, but I can say with great certainty that TikTok has changed my life, or at least, how I view my life in an ever-increasing context.

“I’m so fucking lonely,” says a thirty-something guy, dressed in all black, crying as he drives home from, by the looks of it, a funeral. The video is startling. When was the last time you watched a man in a suit truly, deeply grieve, publicly. Then, in the same TikTok video, we ‘stitch’, otherwise know as ‘cut’, to a woman of a similar age, her eyes, sombre, teary behind glasses, evidently moved by the clip, so much so that she’s chosen to record and post herself reacting to it.

“So I hope that y’all take what he said seriously, because, you know, he just made me cry,” says @pvsllc.

“I haven’t seen my family in months. I spent all the major holidays alone. I’m gonna spend my birthday alone. I don’t have friends in this state […] Literally the only reason I’ve been able to get through this Pandemic is because of TikTok,” she adds as she snivels through what I know far too well, the sadness of feeling alone, not just due to Covid, but in general.

What makes TikTok so alchemical is how smart technology and Creator vulnerability and imagination combine to create a human experience tailored to the individual.

At first, I signed up to indulge in some much-needed serotonin at a time when I was overworked, underpaid and starved of meaningful connections – and this was months before the lockdowns. TikTok filled a void immediately. It gave me levity when things were heavy. How? By churning up content that kept me constantly on my toes, not just catering to my tastes, but to the tastes I didn’t know I had. What makes TikTok so alchemical is how smart technology and Creator vulnerability and imagination combine to create a human experience tailored to the individual.

People like to talk about TikTok as if it were born from this pandemic. But it was birthed from an early societal ailment – widespread, epidemic loneliness. Our human desire to connect and learn through others clashes with how difficult we find face-to-facing in a digitally-driven world.

There’s been so much press about how TikTok came from China, as if by that fact alone it must have been designed as a weapon. What seems to be going under the radar is how TikTok is attracting millions of new users each week, and not just attracting them, migrating them to a new way of behaving online. In the early days, TikTok was about pranks, people falling over, ‘besties’ doing dumb little dances in their living rooms, videos that instructed you on how to wear your pajama pants as a dress, cute animals, cute old people, beauty tips, on and on and on; it’s Vine, YouTube and Instagram blended into one. By liking videos, the AI learns who you are, factoring in your location, which TikToks you watched to the end and which you didn’t, who you follow and who your friends follow. It’s here, on the For You page, where the top-secret algorithm truly performs its magic. It’s here, on this endless, scrollable home page, that you’re truly transported around the world. If the cell phone is a black mirror, TikTok is a rippling pool that reflects back at you glimpses of an inner self you might not even know about.

If the cell phone is a black mirror, TikTok is a rippling pool that reflects back at you glimpses of an inner self you might not even know about.

At the core of it’s AI design, TikTok learns your interests, mirrors your tastes right back at you, then starts expanding what you see, little by little, until suddenly you’re a Christian on WitchTok, or a lawyer on CartelTok, or someone questioning their sexuality on QueerTok. There’s a TikTok for every mood and a TikTok for every flavor. Ask to see a friend’s For You Page and you’ll be taken to a whole new world. ADHDTok, BitchTok, or even, for those who love to wear Crocs, yes, you guessed it, CrocTok. It doesn’t matter who you are, how niche or obscure your tastes are, the algorithm will make you feel seen. For better or for worse, TikTok pushes you down a rabbit hole so that you started as a hobbyist or a moderate, and now you’re an expert or an extremist.

From the favelas in Rio de Janeiro to ashrams in India, to traveling across Canada with the girl who’s quit her job and now lives out of a bus, each time I open the app, I buckle up to see where TikTok takes me. There’s the gay couple from Argentina who dance together, then, against the rigid tradition of tango, make out on camera. There’s the beloved @cost_n_mayor, a dance duo who moved back in with family, formerly unemployed, now thriving from the exposure they’ve amassed on the app.

I desire to travel more? I respect people who rebel? I studied in Argentina, the north of Buenos Aires, to be specific? What does TikTok know about me that either I’ve forgotten, have left buried, or have yet to learn? It rarely gets it wrong.

When I tap in, some days I’m watching a skydive from the point of view of a pro, some days I watch someone weave a blanket, and other days I’m learning about parasitic worms and the many herbal products I can make in my own kitchen to tackle them. I, like many, just watch, never making my own videos, but instead, I watch, absorb and share the TikToks I love, evangelizing the platform for its refreshing lack of elitism. The algorithm’s genius is that it learns what you want. But what, in return, does TikTok want from us? Facebook and Instagram use AI to mine our images, our captions, our searches and the things we like in order to market and to us, as well as to sell that data to advertisers. But Tik Tok’s model, for now, is less direct, more based on amassing users by tailoring their feed to be minutely specific to them.

Creators, when they gain enough followers, can join the Creator Fund, which pays out creators directly. The fund allows them to earn money dependent on views, so that the most followed users, such as Addison Rae or Charli D’Amelio, pretty white girls who really just regurgitate other people’s choreography, are collecting by the millions. The influencer marketing model remains here. But it’s not just the highest stars who are cashing in. I heard that @Doggface208, most liked for drinking cranberry Ocean Spray while skateboarding and lip-syncing to Fleetwood Mac’s ‘Dreams’, cash-bought a house for over $300,000, all from his TikTok income. Sounds dreamy for brands like Ocean Spray, receiving free spots from creators they have no contact with. @Doggface208’s TikTok was rehashed and recreated by millions of users and viewed by hundreds of millions. I’m not saying that capitalism doesn’t find a way.

What’s special about TikTok though, is that for every pretty influencer doing a dance, there’s a sweet old man who transports pets, a kind of friendly American Santa, who when first popped up on my screen, barely had any followers.

The content often feels distinct from a capitalist agenda. Rarely boasting, bragging, or trying to make us buy our way into feeling something, TikTok, for many like myself, is a digital haven that puts humanity first. But please note, this is thanks to its creators. And what about the AI behind it? It makes this app like an X-Ray of the soul, a wonky doctor that takes my data and prescribes a prescription accordingly. The big unknown is the social side effects we’ll see.

“I go on Live on TikTok because that’s how I talk to people, that’s how I actually get to communicate with other adults,” says @pvsllc, and though I know this isn’t the answer, seeking solace from a screen, but for now I’m grateful for how effective a patch it is.

It doesn’t matter who you are, how niche or obscure your tastes are, the algorithm will make you feel seen.