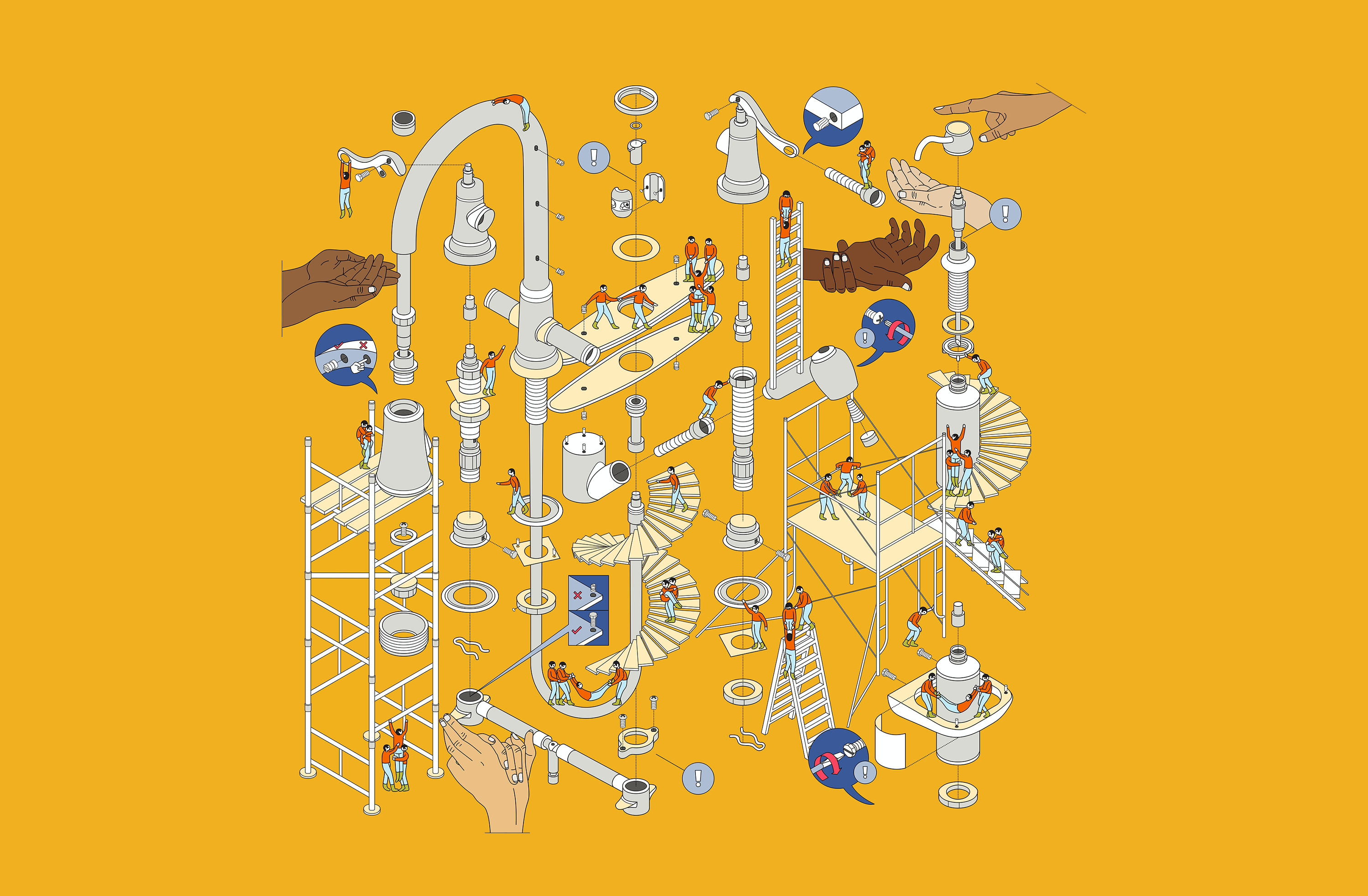 About The “New Normal”…

Why "Normal" Is Preventing Progress

The redundancy of the last few months has felt a bit like that Bill Murray 1993 classic, Groundhog Day (or if you were born after ’93, the 2020 Andy Samberg streaming-because-theaters-are-petri-dishes-right-now release, Palm Springs), echoing the same sentiment:

“I want to return to normal/I’m just dealing with the new normal.”

What Even Is Normal?

Unless you’ve been living under a rock these last few months, you’ve probably noticed things are different now. If you have been under a rock, it may be in your best interest to just head back for a bit…

Nearly everything that comprised daily existence has changed. Sweatily busting out the choreography from Step Up 2: The Streets at the bar that hasn’t carded since the movie was released in 2008 and then subsequently following up the next morning with a brunch where you have to beg your friends to delete the Instagram story evidence isn’t the safest idea right now. Simply going to the store requires some forethought and more awareness as to where your body is in proximity to others’. Masks are now a required accessory in the daily ensemble when you do venture out. Maybe you are paying more attention to how and how often you wash your hands now.

“Normal” suddenly requires a little more work, consideration, and comes with barriers; a seemingly overnight shift that shattered the confidence in the certainties of the every day and brought with it uncertainty.

There’s safety in normalcy. No matter what happens, this can be expected. That’s normal. It can be redundant, but the element of confidence in knowing what to expect is comforting. If you know what to expect, you can better prepare. It’s easily taken for granted until it’s no longer there.

“Saving It For Sentimental Reasons”

Normalcy is a bit like trying to throw out that shirt which is missing two buttons right in the navel area. You swear you’re going to replace them once you remember to drop by the button store (you’ll need to set aside 10 minutes to look up a button store) on the way home and also learn to sew (another 10 minutes on YouTube). You know deep down you’re never going to replace those buttons, but you also don’t want to throw out the shirt because you’ve had it for seven years and you can associate at least three separate memories with it. They aren’t significant memories, but nostalgia!

Then, one day the shirt is gone. Maybe you finally mustered the courage to give it to someone with two buttons and a dexterous hand. Perhaps it got mixed into a donations pile. There’s a chance it was stolen, but what kind of lunatic steals just one shirt? Especially one that’s missing two buttons right in the navel area (an argument can be made, perhaps for someone on their way to a job interview or a date, who would actually need just one shirt and wouldn’t have the space to keep a bundle of shirts as that would be difficult to explain during the “so tell me about yourself” portion of the interview/date). Either way, the shirt is gone and along with it, the comfort (normalcy) of knowing that shirt was there when you one day decided to make it a real shirt again. You might miss it at first. A rogue hanger collecting dust as it waits to be occupied by a garment. You didn’t love the shirt, but you liked having the shirt and knowing that should you choose to one day wear it out, it would be there. Maybe there’s some relief in finally being freed from the clutches of a neglected garment that was just taking up space.

Letting things go isn’t easy, even things that seemingly have little to no impact on the day-to-day, but exist solely to add a layer of comfort or normalcy to life. It’s hard enough to just exist these days so comfort is taken when it’s given; devoured like a goldfish being fed for the 27th time that day by its four-year-old owner who doesn’t quite understand the concept of overfeeding. Normal is comfort. It’s the comfort taken in the certainty. It’s the comfort in knowing an aspect of your day hasn’t changed, even if it is seemingly insignificant.

The Safe Word Is… Normal

There’s a glaring issue in using “normal” as part of the daily rhetoric. Words like normal and the accompanying feelings associated with it suggest something must then be abnormal. It means something new or a change is required. Things certainly aren’t “normal” by any means, however, the problem with this language is that it leads to opposition and sets audiences on the defense. People are generally resistant to changes, especially those that are unsolicited. While it’s highly unlikely anyone is a proponent of an international pandemic (and if you do fall into that crowd, it’s also likely you have a pretty cool evil villain lair replete with hairless cats and a lovely black on charcoal on obsidian aesthetic. Trés chic.), labeling the accompanying way of life as abnormal invokes feelings of negativity and defiance. No one wants a “new normal.” The old one was perfectly fine! In fact, it tops the list of things people don’t like to be new:

Well, That Was Weird

The desire for normalcy is innate, which is why it’s tough to have it shifted so drastically. People are uncomfortable and the comfort usually received in the mundanity of the day-to-day isn’t there. It’s a frustration that is being seen across the country as people force their way into trying to obtain just a semblance of the normalcy that was lost. In the throes of an international pandemic, people are willing to risk their health and that of others simply to do what they’ve always done. You see it everywhere as people sit at packed bars enjoying communal nachos laughing over open beverages and “getting in really close” so everyone can fit in the selfie because another Thursday night in is boring. Rather than wear a mask for 15 minutes to run into a store, people are willing to physically fight a minimum wage employee because a mask destroys that sense of normalcy. Feeling normal is pretty important to a lot of people.

Weirdness has been stigmatized. It’s ingrained from a young age when kids that don’t fit into the standards of the norm are excluded from the playground shenanigans. Normal good. Weird bad. Be normal. Even when weirdness is encouraged, it’s still within a certain scope of the parameters of normalcy. Be weird, but not too weird. You don’t want to frighten the small children. When normalcy is set as a gold standard, you find that’s exactly what people strive for and when that normalcy is rocked, well, people aren’t very happy about it.

Not having a sense of normalcy is hard. Humans are creatures of habit. Resistance toward change and the abnormal is warranted. Not everyone wants the growing pains of change. While a changing of the normal doesn’t necessarily mean there are good outcomes, it also doesn’t mean there are bad ones. Change fosters growth and while it may not always be comfortable to grow, sometimes it’s what is needed.

Right now, it seems the challenge is figuring out how to inspire audiences to feel just as comfortable in the abnormal as they do in the normal. The world is changing and with that, normalcy. The thing is, normal is something that’s always evolving because people evolve. Sometimes the changes in the normal are small like switching cereals and sometimes they’re big like not being able to hug your new friend that you just met in the back of the Uber share at the end of the night, which can be jarring. Embracing the change and not stigmatizing anything that falls outside of the norm makes it all the more palatable, especially when the goal of communicators is to set up audiences to be in a position to see, generate, and accept new ideas, which often won’t be “normal.”

The way communicators choose to speak to audiences shapes the conversation and the tone. If you want to inspire audiences, the rhetoric around “normalcy” and what that is needs to change. Do away with all of the “normal” and “new normal” language that sets up the framework for panic and resistance when normal isn’t achieved. The quicker the yearning for “normalcy” is dropped, the quicker the focus can shift toward discovery, acceptance, and the possibilities.