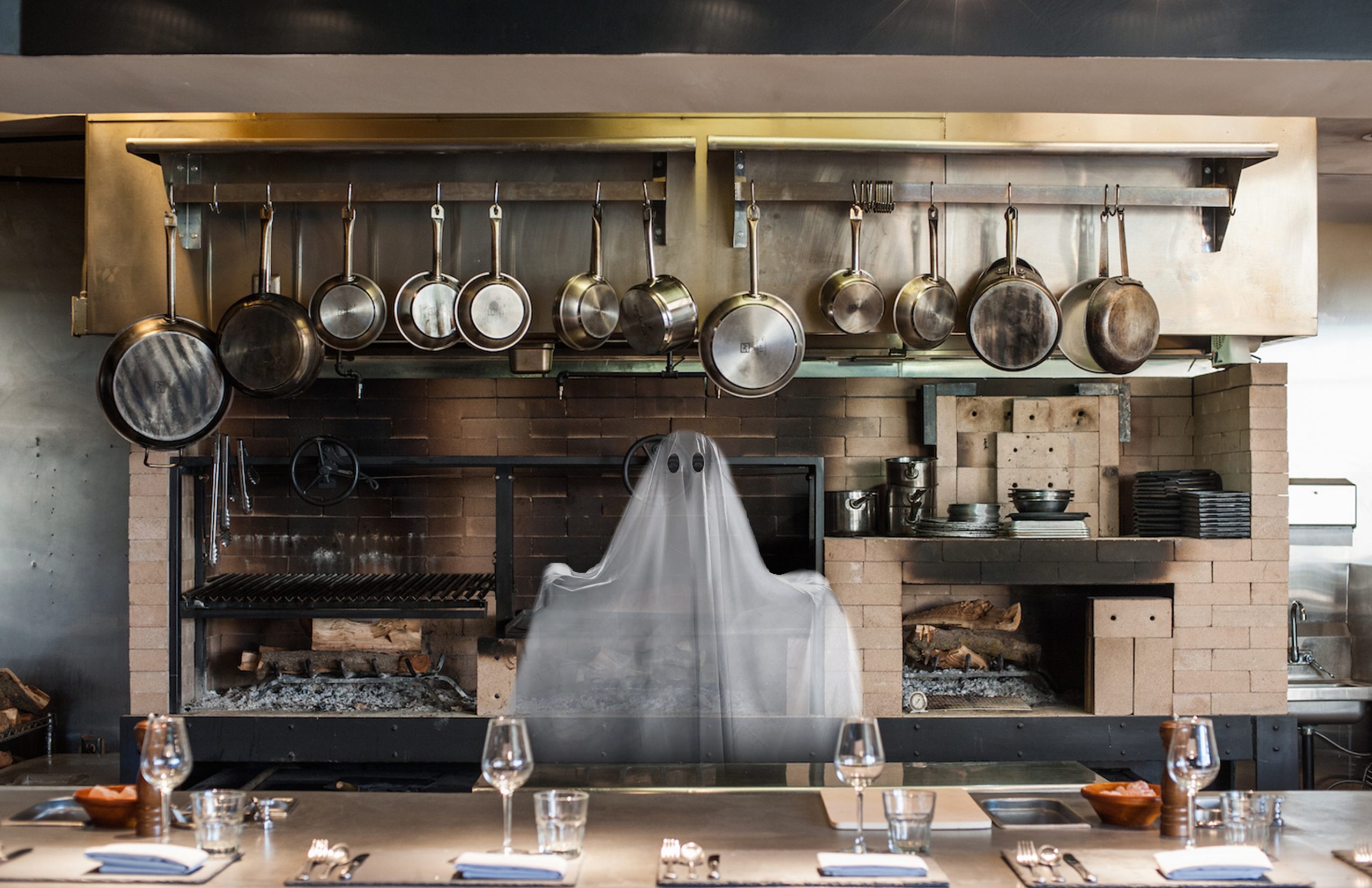 The Ghost of Kitchens’ Future

But are they a thing of the past?

The terms “Virtual Restaurant” and “Ghost Kitchen” have the ring of the unreal and the uncanny. In practice, though, both are quite practical, efficient, and in fact ordinary ways to get food delivered to your door–a service Americans have been using for a very long time, of course. Many of the innovations of the pandemic have more to do with what we call them and how we use them, not what they are. Zoom is, after all, just another iteration of the video conferencing platform, which has been around for a while now.

A virtual restaurant is created, more or less, by simply adding a product line to a restaurant’s kitchen, either produced by the restaurant itself or by another entity that shares that restaurant’s space for a commission or rent. In either case, a new name and branding platform are launched for that product.

A ghost kitchen is basically a commissary; you could think of it as a food hall that (only) delivers–the kitchen is actually the only non-ghostly thing about it. Some ghost kitchens are mobile, often deployed to parking lots in areas where there’s high demand; if they had windows that flapped up so you could order from them, they’d be food trucks. Some of them probably will be, in due time.

In other words, it’s not the concepts but the terms–virtual, ghost–that are the main novelty.

The other novelty–and the reason these food-delivery systems’ popularity and revenue are booming–is the pandemic, of course. With many dine-in restaurants closed for more than a year, restaurateurs have been forced to adapt. Sure, necessity is the mother invention, and effective people make lemonade out of lemons (or taquerias inside pizzerias); but the actual practices of ghost kitchens and virtual restaurants aren’t new: like much else that seems pandemic-perpetuated, they were already around before 2020.

But the way we use them is, and so is the way they appeal to us: their messaging and branding.

For most people, delivery used to be food you settled for when you didn’t feel like cooking or going out. Once it became central to the way we eat, delivery food had an opportunity to remarket itself as gastronomy. That’s not to say most of the fare isn’t still wings, pizza, and other staples of dinner delivery–eaters are not by nature very adventurous–but it no longer has to be. The emphasis can be on the food, not entirely on the convenient and safe means of getting it.

That gastronomic component of delivery kitchens was also happening before the pandemic. For example, Rachael Ray, the food TV personality, launched a temporary pop-up in the fall of 2019. The recipes were pulled from one of her cookbooks–usually restaurants beget cookbooks, not the other way around–but instead of preparing the dishes at home, you got them cooked for you and delivered–and delivered only by UberEats. Concepts like Ray’s allowed other serious restaurateurs to pivot to ghost kitchens during the pandemic without having to feel like they were slumming.

It would be worth noting that Ray’s pop-up was operated by a company called REEF Technology, which builds mobile kitchens and rents them out to restaurateurs for a fraction of what they’d have to shell out to build out a brick-and-mortar restaurant. They can even supply the cooks from a stable of them they maintain, if a restaurant needs help with staffing. All you really need is a concept–like “Rachael Ray.” It’s a turnkey solution to a means of survival at a time when many restaurants are forced to pivot away from dining room-based service.

It would also be worth noting that REEF Technology was, until recently, known as ParkJockey Global; as the name suggests, the company was in the business of parking lots and garages. They own 4,800 of them. During the past stay-at-home year, they’ve had plenty of free parking for all those mobile kitchen trailers they built: a financial and logistical key to their success.

And finally, note that the company’s new name gives no hint that it has moved into the restaurant industry. That’s not only because REEF is still largely in the parking lot business, but also because they have plans for those parking lots that far surpass merely bivouacking food trailers in them: they want to turn them, essentially, into reefs where human ecosystems can thrive. REEF envisions transforming its lots into the teeming socioeconomic hubs of the future. Meanwhile, until it can turn its parking spaces into community spaces, it stays out of the way of its restaurant clients’ identities and concepts.

And concept is the most important thing here. In fact, it always has been. The 21st-century rise of foodie culture notwithstanding, emphasis in the restaurant world, except in a few very small market niches, has seldom been on food itself. Reliability, value, environment, familiarity and convenience are mostly what drive our choices, with thin and mutable overlays of perceived quality and marketed concept (see, for example the poke bowl craze that lasted about as long as it took to throw the ingredients in the bowl). Concept is also where we find the most innovative thinking in the new prevalence of delivery.

But in the cases of virtual restaurants and ghost kitchens, the concept could have staying power, because they could change the very way we think about how a restaurant comes to be in the first place, and ultimately the way we think of what a restaurant is.

For example, take Sieng House, a restaurant serving Chinese and Japanese food in Boca Raton, Florida. In 2019, its owner was approached by Uber Eats, which has been driving the food delivery market in a larger way: UberEats noticed significant traffic in web searches for wings in the area where Sieng House is located, so they asked the restaurant’s owners if they were willing and able to add wings to their repertoire.

Soon, Boca Wings was born–a virtual restaurant: It has no dining room, no storefront, and no sign–and no other way to order its wings than through delivery apps. You can’t even call Sieng House. The only way you’ll find Boca is by searching for wings in Boca Raton. One of the hits will be Uber Eats’ listing for the place, which gives no hint that it isn’t a “restaurant” in the traditional sense, or that the wings come from an Asian restaurant kitchen, although Sieng House tips its hand just a little when you scroll down Boca’s menu to the appetizers and find tucked away there a modest entry for “the best egg roll in the world.” Still, it’s a commercial kitchen, it makes food, it has a web menu (actually, UberEats has it), and you can order the food, have it delivered, and eat it. Is that not a restaurant?

Sieng House makes a few hundred extra dollars a week off Boca Wings without much stress. No additional staff are required. The product is easy and cheap for the restaurant to make: they already have the ingredients in the kitchen, including the sauces, and chicken wings are among the cheaper parts of the bird. Sieng House only had to come up with a name, which is, sensibly in this context–wings, Boca, delivered, fast–basically just some internet search keywords. To the name they added the barest of logos. And as for the ”concept” (one of the most overthought and overvalued elements of restaurant culture), the concept is that people in the area wanted wings. Uber Eats does the rest.

With Boca Wings–and thousands of other food businesses like it–the whole way of conceiving and branding a restaurant has changed. Web traffic tells you what people are looking for; you start cooking it; you bring it to them–actually, someone else brings it for you, and you pay them a commission. Why didn’t anyone think of this sooner?

They did, of course: the customers did it. They marketed a product to themselves by searching for it online; Uber Eats noticed that; a local kitchen was enlisted to supply it; a “restaurant” was dreamed up ex nihilo–and in fact exists more or less ex nihilo. This is a masterstroke of branding and messaging. For one thing, UberEats absorbed the key lesson that social media has taught communicators: the user supplies much if not most of the essential content, and is to some degree a living billboard–Look up here, this is what we want! The marketer’s job is simply to take that content and run with it, sometimes in the form of realizing an aspiration. For another, the creation of a virtual restaurant like Boca Wings is ingenious because nothing substantial has to be built, changed, or invested in. That’s the real masterstroke: It’s all messaging.

And you can see the broadening out of that message’s reach. Note that UberEats’ high-profile new ad campaign features the Wayne’s World duo, a direct appeal to Generation X consumers: long the most market-proof audience segment, nowadays the (delivery) sandwich generation, often tasked with putting food on the table for family members young and old. It’s a canny appeal to this market segment, and it feels very unforced: no doubt Wayne and Garth would have been heavy users of UberEats had existed 30 years ago. The ad isn’t without some elements of surprise, though. The restaurant they order from in one of the ads happens to be called Boca, but instead of wings in South Florida it serves burritos in the fictional duo’s hometown of Aurora, Illinois. Aurora is a real place, and so, it turns out, is Boca Burritos, which has been open for nearly two decades and has an actual dining room.. That’s the biggest surprise of UberEats’ ad: they chose a restaurant that was not only real, it wasn’t even virtual, or a ghost.