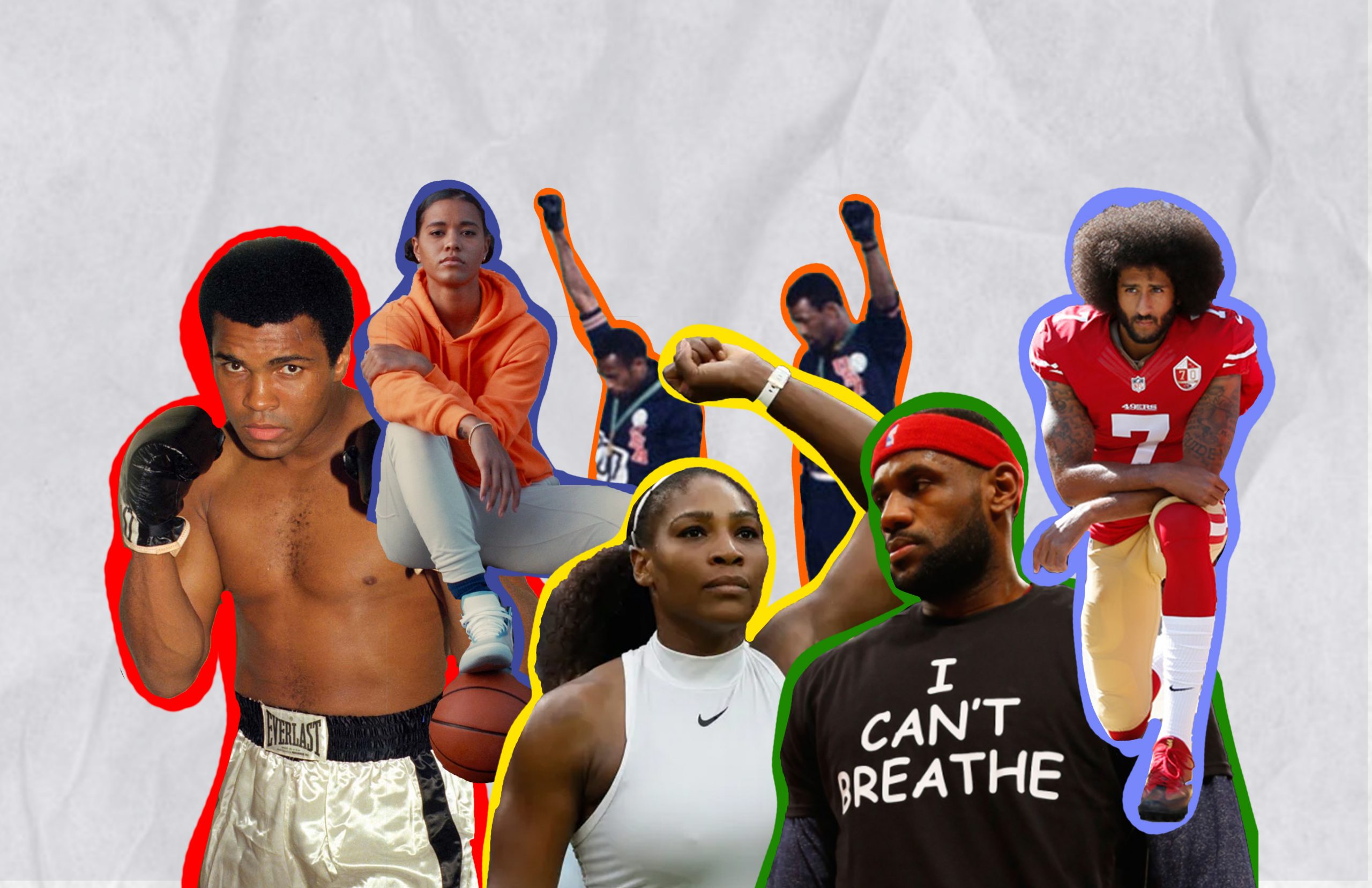 The Fight of the Century

Athletes are speaking up louder

LeBron James and his partner Maverick Carter recently announced the formation of a new media company, SpringHill Co. The venture consolidates James’s current media enterprises and has already successfully raised $100 million, greatly expanding the possible reach of his future work. Meanwhile, James has launched the More Than A Vote campaign, which aims to to combat race-based voter suppression and to advocate for access in advance of the November elections.

It’s fair to say that a lack of basketball has not kept the face of the NBA off the court. On the contrary, James has moved onto a different and much bigger one, where cultural production and political activism meet under a very bright, unusually wide, and urgently important beam.

“Shut up and dribble,” a political opponent infamously scolded the frequently outspoken James less than three years ago. We are unaccustomed and increasingly resistant to hearing the voices of athletes off their fields and courts. But this is mainly because we have forgotten our history. In fact, for the last half century, we have all but abandoned it.

In June of 1967, Muhammad Ali was probably the world’s most famous athlete: a full-blown icon and cultural force whose celebrity transcended his sport, which at the time he wasn’t even allowed to play. Ali had expressed staunch opposition to the Vietnam War and refused to serve. He was convicted of draft evasion, stripped of his championship belt, and banned from boxing.

Embroiled in front-page controversy — and facing a possible five-year jail term — Ali went to Cleveland at the invitation of Jim Brown, the former Cleveland Browns football great. Just two years into his retirement, Brown had already launched a burgeoning second career in the public spotlight as a Hollywood screen star. Ali and Brown were joined in Cleveland (coincidentally LeBron James’s hometown, and the place with which he’ll be forever identified) by the basketball titans Bill Russell and Lew Alcindor. In a few years Alcindor, like Ali, would replace his birth name with a Muslim one, Kareem Abdul-Jabbar, and become one of the America’s politically outspoken sports stars (for which he has been nearly blackballed by the establishment).

A number of other, less famous, but accomplished African-American athletes also attended the “Cleveland Summit,” as it came to be called. The summit’s official purpose was to gain peer endorsement of Ali’s anti-Vietnam stance. The meeting came a a highly charged sociopolitical moment: the beginning of the “Long, hot summer of 1967,” with race riots about to erupt around the country and the first major antiwar protest against Vietnam, a march on the Pentagon, only a few months away. And, far from coming to Cleveland merely to sign off on Ali’s controversial stance, some of his peers at the summit disagreed with it.

Like other watershed moments, such as Rosa Parks’s famous defiance of segregation, the history of the Cleveland Summit has been somewhat airbrushed over time. It was actually convened with the aim of persuading Ali to agree to engage in some exhibition fights on military bases. In exchange, the charges against him would be dropped. Brown arranged the meeting under the influence of Ali’s business partner, Bob Arum. Their promotion company, Main Bout, controlled the rights to Ali’s fights in the days when athletes running their own branding and media agencies was virtually unheard of: a forerunner of sorts to James’s SpringHill Co., among many others.

During his ban from boxing, neither Ali nor anyone else at Main Bout was making any money, of course, and America was bereft not only of a great athlete in his prime but also of a major entertainment force who drew record-breaking crowds and huge viewership to his fights; a virtual one-man cultural and economic machine had completely seized up. Arum had also quietly offered other athletes he’d invited to Cleveland the possibility of profiting from Main Bout’s future endeavors. In other words, it was a business conference as well as a political summit.

Despite strong persuasions, Ali declined the exhibition fight offer. Yet at the end of the summit, his fellow athletes unilaterally endorsed Ali’s opposition to the war: a politically risky and financially null but culturally powerful choice. Ali’s peers recognized that the spotlight was shining not only on Ali and his passion but also on the right side of history-in-the-making. And that is, ultimately, the most valuable and enduring form of currency.

“It’s now smart business to embrace activism,” Forbes recently observed, noting that “Converse sig[ned] Washington Mystics guard Natasha Cloud [an out African-American lesbian] to a lucrative endorsement contract because of her outspokenness.” It was smart business in Ali’s day, too. In 1971, after his conviction was overturned — surely because public opinion on the war in Vietnam had swung strongly and firmly his way — so much hype built up around his subsequent heavyweight title bout with Joe Frazier that it came to be called “The Fight of the Century.” All eyes were upon it.

The year after the Cleveland Summit, at the 1968 Olympic Games in Mexico City, two African-American medalists famously lowered their heads and raised black-gloved fists on the ceremonial awards podium as the “The Star-Spangled Banner” played. The iconic image is the clear antecedent to that of football quarterback Colin Kaepernick taking a knee during the national anthem in 2016. (It’s worth noting, speaking of “smart business to embrace activism,” that when Nike subsequently signed the blackballed Kaepernick to an endorsement deal, the company’s stock surged to an all-time high.)

Yet the 1968 Olympic protest was, arguably, the last deliberately and meaningfully activist gesture made by any American athlete until Kaepernick’s nearly fifty years later. Throughout the 1970s and into the expanding 1980s, the booming 1990s, and beyond into our era of globalized wealth and fame, elite athletes have had less to struggle against and more to safeguard. Over the last generation, powerful superstars like Michael Jordan, Derek Jeter, and Tiger Woods have generally limited their actions to the courts, fields, and courses.

But history has caught up with us, as it inevitably does. The heroes of the world of sports have been compelled to raise their voices again. It’s happening all over, from LeBron James’s voting rights initiative to Russell Wilson, Megan Rapinoe and Sue Bird opening the latest ESPY Awards show with a powerful call for racial justice; from Roger Goodell’s apologetic video to the mini-drama of Drew Brees’s off-target, quickly censured commentary on the sanctity of the flag and his subsequent enlightened recanting of that commentary. In basketball, Duke University Men’s Head Coach Mike Krzyzewski, among the most illustrious and highly respected coaches in the ranks of all college sports, went well out of his way to voice public support for Black Lives Matter; he was echoed by one of his proteges, Quin Snyder, a former Duke guard and current head coach of the NBA’s Utah Jazz, who not only came to the defense of one of his embattled players but took the opportunity — almost unthinkable just a few years ago — to speak more broadly about the tremors of the current moment: “It’s OK to be uncomfortable,” Snyder said. “We don’t need to be defensive about what we hear. We need to process it, try to understand, because at that point, when we have a greater understanding we can have that dialogue and begin to find those ways that we can to unite.”

Even the calls for a Kerr/Popovich presidential campaign ticket, a hopeful if unrealistic imagining of two progressive NBA coaches as national leaders, bespeaks a popular desire for sports to help lead the way forward — and at a moment, no less, when every major American sport is suspended and athletes have only their voices at their disposal. But even one of the few organized pro sports that has resumed play, the National Women’s Soccer League, recently opened with every player on both teams kneeling during the national anthem while wearing Black Lives Matters t-shirts. The emotion that ensued was far more powerful than the game itself.

Most surprisingly, the energy is rising up into the usually closed corporate ranks that employ athletes. During the weekend following the murder of George Floyd, protests roiled around Atlanta’s State Farm Arena, where the NBA’s Atlanta Hawks play. The franchise’s ownership and management quickly conceived a plan to turn their building into a massive polling station for Georgia’s primary runoff election on August 11, and then an early voting station for the general November elections. The Fulton County Registration and Elections Board approved the team’s proposal on June 29.

The same year of the Cleveland Summit, 1967, Simon and Garfunkel sang: “Where have you gone, Joe DiMaggio? / A nation turns its lonely eyes to you.” Even more than the stars of the silver screen, athletes are the proper idols of our society. Sports, like the free market, are fundamentally competitive, and every time athletes suit up and play, they are saturated in mind and muscle with an understanding of how we live in America. For years, they emitted a sound of silence so conspicuous that it grew almost deafening. That they have been empowered and emboldened to speak up again, when the nation’s ears are as lonely as its eyes, might be the season’s greatest victory.