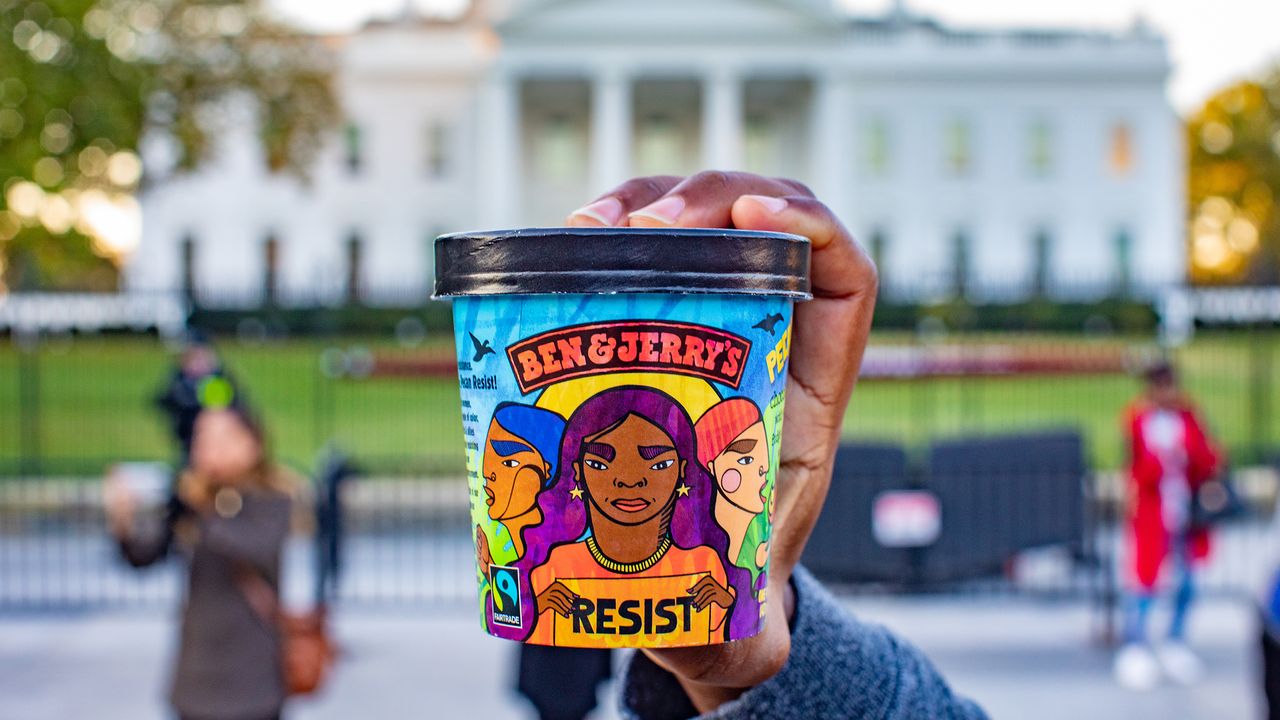 From sustainable food to refugees to LGBTQIA+ rights to social justice, Ben & Jerry’s is one of the few major brands that has never been shy about speaking out on issues they are passionate about. A quick glance on their Instagram page shows a healthy mix of messaging promoting their (delicious) flavors as well as crucial social messaging. Their website includes an entire section where they not only inform fans about a wide range of issues, they also take the time to explain how Ben & Jerry’s is working toward a solution as well as offer suggestions for how individuals can do their part. Ben & Jerry’s doesn’t just talk about it, they have also been great about putting their spoon where their ice cream is by doing more than just limiting their activism to the online space. In Australia, they refused to sell two ice cream scoops of the same flavor until same-sex marriage was legalized. In 2018, they released a flavor called “Pecan Resist” as part of a campaign opposing Donald Trump.

Their latest social activism endeavor doesn’t directly impact customers in their brick and mortar locations, however. On September 15, in conjunction with Vox media, the ice cream connoisseurs introduced their latest social foray and launched Who We Are, a 6- episode podcast that highlights the history of racism in America. The goal of the podcast is to learn from the mistakes of the past in order to build a brighter and more inclusive future by exploring

“a side of American history that most of us didn’t learn about in school: a history of the people and systems that sought to justify human trafficking, slavery, and the subjugation of Black Americans long after slavery was legally outlawed.”

It’s easy to forget history, but by continuing to talk about the ugly parts of American history, Ben & Jerry’s is working to incite change.

For decades, the United States has quietly hidden its dirty laundry. The land of the free and home of the brave… provided you are Christian, heterosexual, white, and wealthy. Otherwise, nevermind this doesn’t apply to you. As great of a country as the United States is, recent years have made it blatantly clear there is still a lot of work that needs to be done to actually make America as progressive and equal for everyone as it claims to be. In recent years, people have become more comfortable talking about injustices, raising awareness when those injustices aren’t meant, and working to ensure that the same mistakes aren’t repeated.

Much of that activism is now coming from celebrities. It’s not entirely surprising that celebrities have become the cultural mouthpieces in attempting to get Americans to consider social justice issues. Americans have longed propped public figures on pedestals, worshipping at the feet of those that are athletically or genetically or musically superior, ready to embrace products and projects endorsed by their favorite celebrities. They’re lauded when they win games or awards or put on a spectacular show, but when they break from script and speak about real issues, they’re met with jeers and told to keep social issues out of the conversation. Hide the dirty laundry. Shut up and play.

Well, if you don’t want to hear it from LeBron James or Chelsea Handler, then maybe the message will be better received from your favorite clothing brand or restaurant or entertainment company. Brands are usually less eager to take a specific stance out of the obvious fear of alienating consumers. They aren’t individuals after all and being socially active could potentially damage their business beyond repair, which is why it’s particularly surprising when a brand does indeed break from the tradition of staying neutral and comes out with a clear stance on social issues. It could be that these fears of alienating consumers shouldn’t really concerns at all, provided the messaging is socially favorable. Ben & Jerry’s hasn’t particularly suffered. They were the top selling ice cream brand in 2019. Steak-Ummm actually gained Twitter followers and new customers this year after converting their Twitter account into a pandemic fact-checking hub. Nike’s revenue increases YOY as they continue to align their brand with racial equality messaging. It’s worth pointing out the aforementioned brands have all aligned themselves with causes and issues that are progressive and more liberal leaning. Spanish food company, Goya, found themselves in the midst of a boycott after their CEO publicly praised the Donald Trump administration which reportedly resulted in $47 million in negative press. How loud can a brand get before they too hear “shut up and _________”?

2020 will go down in history books for many reasons, but in particular, it will go down as the year America finally woke up and realized it had a pretty bad racism problem. Marching and protests for social change aren’t anything new. Those have been going on for decades. What has helped drive the conversation and make it impossible to disregard is social media. It’s very hard to ignore something that’s constantly popping up on your feed no matter what platform you use.

If change is to happen in this country, more communicators need to follow the Ben & Jerry’s method and utilize their social platforms for good. More podcasts talking addressing systematic issues are needed. More videos documenting injustices happening across the country are needed. More peaceful protests are needed. More brands need to say, “glad you like our product, but we also want you to know about this injustice.” It’s not comfortable and it certainly isn’t easy, but it’s necessary work.