Pomp Under the Circumstances

Time lately has let out slack. Space has widened around us, and the overall volume has grown softer. But in our own places of shelter, we may find that the air has grown more compressed and rarefied. Many of us have a much greater  store of attention to pay these days, and mental effort to spare. It’s this newfound alertness–especially to the spaces where something should have been but, by necessity, can’t be right now–that communicators can tap into. Anyone who can find unexpected ways into the passages while rites are under wraps may draw fresh eyes not only to the subject in question, but also to the one calling them to it.

For example, graduation day. The world over, high school seniors have recently been receiving their diplomas, but in mostly empty auditoriums and distanced processions. These are safe and commendable versions of the ceremony under the circumstances; but where there is resourcefulness and creativity, there are unexpected celebrations, and some of them improve on the conventional model, whether in conception or in the spontaneity of the moment. In New Hampshire, a ski resort donated its lifts to a local high school for a literally uplifting flyover ceremony. In Nashville, Tennessee, a ride-along event made a graduate named Dontrail Spencer famous for his astonishing flood of emotion–some of it surely elicited by the current collective mood under quarantine.

And at least one graduate was feted with a drive-up celebration in which the vehicles themselves made for both an audience and a spectacle–and far outdid the conventional model they replaced.

Even before its existence was threatened, Evelyn Ponder, who recently graduated from Jordan High School in Durham, North Carolina, wasn’t especially excited about her impending graduation ceremony: “boring,” she predicted. When the school announced earlier this spring that it might have to cancel the event altogether, “I got over it quickly,” Ponder says. “I was a big fan of them mailing out diplomas and trying again for a ceremony when I graduate from college.” 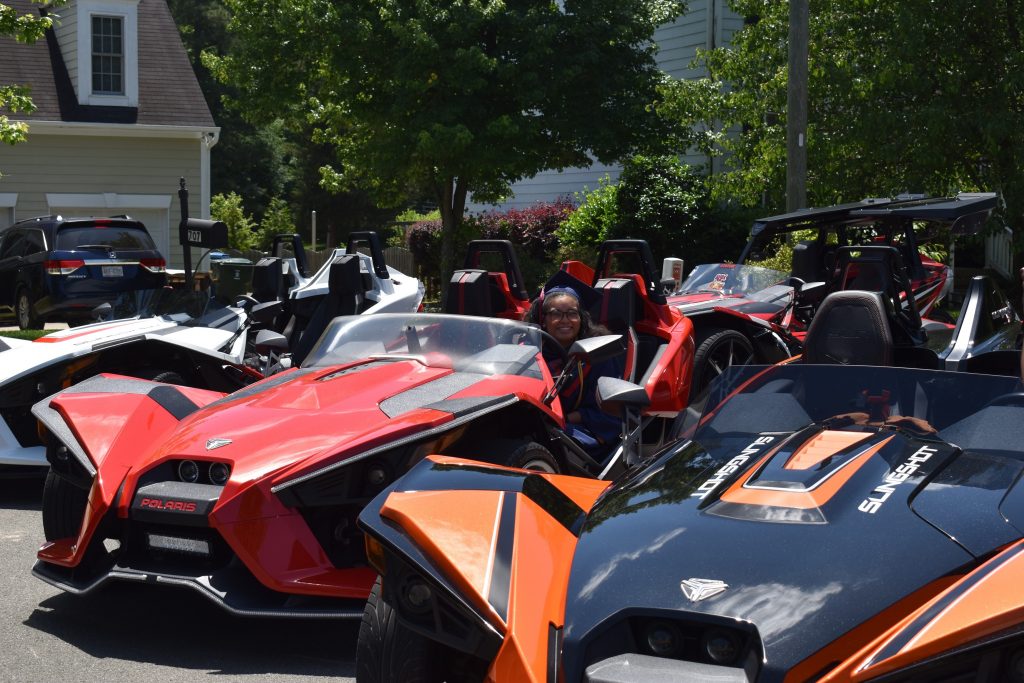 Sage enough. Meanwhile, though, her mother’s boyfriend, Malik Lee, wasn’t going to let the circumstance pass without pomp. Lee is a member of Capital City Slingerz, an area chapter of slingshot car owners. The group is only about a year old but has quickly taken hold locally, and its steadily increasing membership has risen dramatically during the pandemic. Meeting for group rides was among the few already established socially-distant recreational practices for the outdoors.

Compared to other chapters, the Slingerz are unusually active in the civic realm. They frequently ride in holiday parades, lend their presence to charitable and humanitarian causes such as breast cancer and multiple sclerosis awareness events, and maintain an enthusiasm for and commitment to doing more than just getting together for weekend highway rides.

“We check in every morning,” Lee says, “especially nowadays, and I posted that Evvy was graduating and we were unsure what graduation was going to be, or if it was going to be at all. It led to further conversation”–how can we help her celebrate?–“and other slingshotters posted that they would gladly participate.”

One morning in May, then, Ponder’s mother woke her up and asked her to get dressed to go to the store–already the makings of a red-letter day in these mostly homebound times.

“I was really excited to go to the store,” Ponder says, so much so that she didn’t immediately question her mother when she was asked to put on her graduation and cap and gown. Before she could wonder very much about the odd request, she came outside to see a dozen slingshotters rumbling in full regalia down her cul de sac, sounding horns and music aplenty: not only a rare spectacle of show cars, but a surprise party to boot–and all for her. She was lavished with individual attention she’d scarcely have gotten as one of hundreds of graduates marching dutifully across a stage for a handshake. Meanwhile, Ponder’s neighbors popped their heads out of doors to see what the commotion was about, and quickly joined in the socially-distant festivities.

“It was really special,” Ponder says. “If they had handed me my diploma, I would have said, ‘This is it, I graduated, we’re done!’” 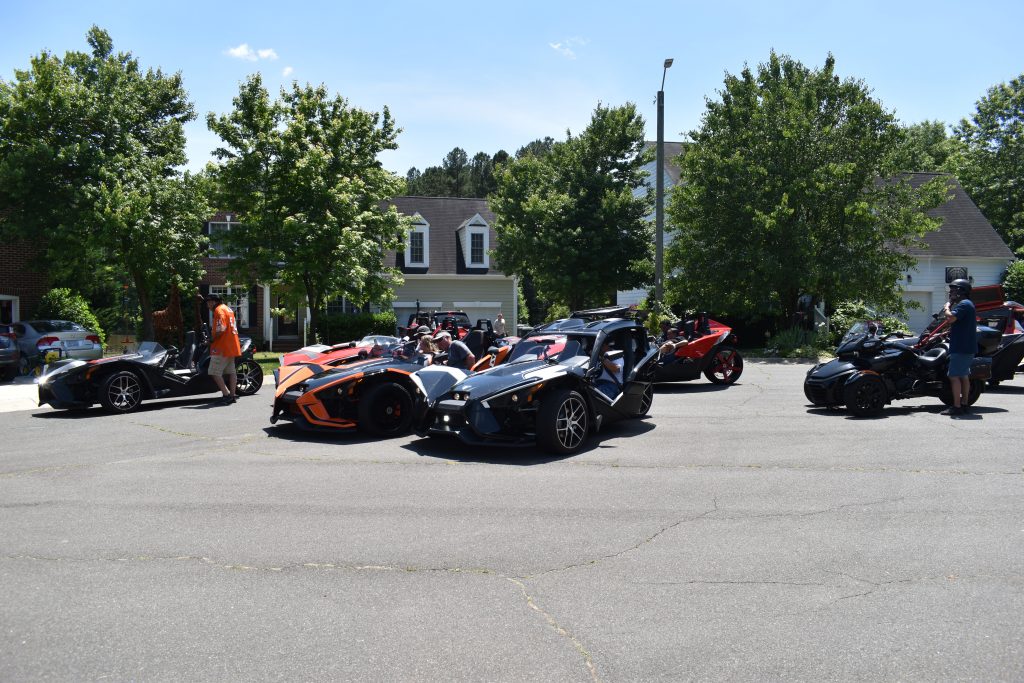 The slingshotters weren’t done, though. Two other members of Lee’s club also had kids who were graduating, so the motorcade repeated its performance for two other students in town–and threw in a visit to the parking lot of a retirement home in the neighborhood of one of the graduate’s parents, where the residents gathered in windows and doorways to enjoy the unexpected parade. Throughout the day, the club’s leader made sure to plot the riders’ route not over the highways they usually ply when they meet for group rides, but through mostly lower-income neighborhoods.

“Everywhere we went,” Lee says, “people came out and were waving. The more we rode, the more we saw people who would come out and cheer.”

In the end, then, what had begun as an improvised celebration for a single graduate turned into a daylong public parade–the spotlight widened to light up the town. Meanwhile, as the Slingerz spread their attention about, they were also already receiving it, unbeknownst to them. During the previous months, Polaris, the company that manufactures slingshot cars, had been taking notice of the group, which is not only among the most civic-minded chapters but also, according to Lee, unusually diverse along racial lines. A couple of weeks after the surprise graduation stunt, one of the Slingerz’ leading members was named an official Polaris ambassador.

With our current lack of crowds and the mass attention they bring to any given event, and with the suspension of most of the daily activity that drives our accustomed lives and business, it can be hard to detect the great energy and creativity that the pandemic has released–particularly around shared phenomena, like graduations, which take place everywhere and at around the same time. When we are all forced to reconsider the same thing at around the same time, the effect is to enlarge and enhance its importance: to restore true pomp and circumstance where mere convention usually obtains and, in doing so, to build a think tank of ways to renovate it in the future. Above all in these strange times, we have the opportunity to make the familiar intentionally strange, so that we can clearly behold it once again, and raise awareness to the height it deserves.