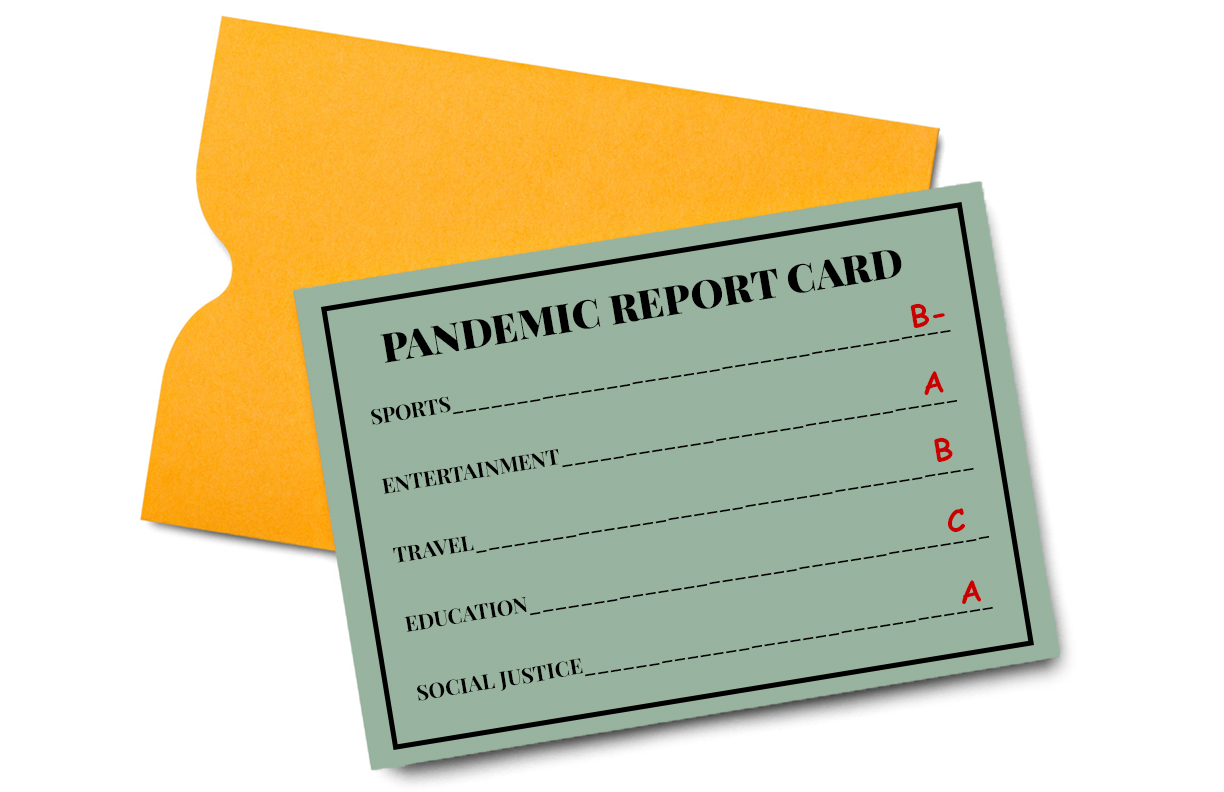 Gather round patrons of the pandemic!

It’s been about 872 days (give or take) since many learned proper handwashing technique (baby steps) and the importance of social distancing (respect my disinfected bubble). At this juncture of the pandemic, as industries begin to resume, it’s time to candidly evaluate what’s going well and what isn’t. After all, the only way to improve is to talk earnestly. This is a safe space. As this is likely the first (and hopefully last) pandemic for many, grading was a bit more lenient. Glean lessons from the mistakes in the hopes of improving for the future.

Grade: Held to a Single

Notes: Ah sports! You were doing so well until the MLB brought the curve down with a massive outbreak among the Florida Marlins. While it wasn’t enough to end the already truncated season for the entire league, it is cause for alarm and raises the question: were sports were too quick to resume? Thankfully, the NBA and WNBA have been doing a remarkable job of safely continuing their seasons and keeping the pandemic outside of their bubbles. MLS and the NHL have also been doing well in keeping athletes safe following similar guidelines. Tennis, golf, and NASCAR are all sports in which social distancing is relatively easy to maintain, leaving the NFL to see if they can execute an entire season without fumbling. Prior to NFL training camps beginning on July 28th, many players voiced concern about the upcoming season as football is one sport in which it is extremely difficult to maintain social distancing and unlike the NBA and WNBA, wouldn’t occur within a bubble. So far, the NFL hasn’t reported any cases in training camps. Maybe those sanitization spray stations are actually paying off.

Takeaway: Err on the side of over-caution. It’s better to be overprotective than make a costly mistake. While audiences certainly want to be back in the throes again, they will be patient if it means having it done correctly and safely. Sports are a team effort and only work with the collaboration of everyone. Audiences are an extension of your team. If you don’t have full buy-in because they don’t feel safe, the team is going to struggle.

Notes: When you have an industry that relies so heavily on a lot of wealthy people staying healthy, you’ll find a bit more caution when it comes to workplace practices. God forbid Ryan Gosling be incapacitated for two weeks. The world needs Baby Goose! Entertainment has been slow to resume with many shows either shooting from home or holding off on production entirely until it is safe to do so. There have even been new discoveries within digital entertainment and production. Movie theaters have yet to reopen and most live events such as concerts, comedy shows, and even strip clubs are either postponed or have pivoted to a drive-in model ((yes, strip clubs have now adopted a drive-thru model… pandemic priorities) where everyone is supposed to stay in the cars, but sometimes the rhythm moves you too much and you just have to hop out of the Prius and drop it like it’s got corona (looking at you, everyone that went to the Chainsmokers’ Hamptons concert). Regardless, entertainment has handled the pandemic rather well and some of the strategies implemented in this industry may become standard across others. Time will tell how well these strategies will work.

Takeaway: Know your place. Entertainment is a “nice to have”, but not a must-have. The industry seems to understand that while people truly enjoy the fruits of their labor, it isn’t worth risking anyone’s health over. The beauty of entertainment is that it can be done almost anywhere and the versatility of the industry has been one of the diamonds in the rough of the pandemic. There have been some amazing shows of adaptive creativity! As communicators, it’s important to also be flexible when thinking about how to speak to audiences and not being afraid to try something new.

Grade: Not quite first-class, but sort of like those extra legroom seats in economy

Notes: No one has been anywhere. Good. Of course, that’s more likely due to strict travel bans on American passport holders to a good bit of the world (quick getaway to Serbia, anyone?). Travel was one of the first industries to drastically scale back operations. As it has inched back into the rat race, there have been several safety precautions implemented across major airlines including the requirement of wearing a face mask to fly, blocking the middle seat as a bookable seat, and rigorous disinfecting in between flights. Many hotels are following suit and removing services that would normally require more direct contact such as daily housekeeping or in-person check-ins and are requiring guests to wear face masks at all times in public areas. Although this was one of the industries hit hardest, travel has done a pretty solid job of ensuring customer safety.

Takeaway: Travel has done well with assessing which aspects of their business can be modified for safety and it could even be that some of these procedures stick around post-pandemic as travel has been known to adopt and stick with procedures post major events. The same perspective can be applied to you. Are there aspects of your business that can be modified to provide a better and more enhanced experience for clients? Don’t wait until it’s broken to scramble to fix it.

Notes: Oh, honey. With schools across the country resuming with both in-person and digital learning this week, only time will tell if the decision to re-open schools is only terrible or downright catastrophic. Granted, there is no easy fix with education. Asking parents to both teach their kids as well as work from home is a heavy ask. And of course, kids need to learn so they can make sound decisions in the hopes that one day they won’t be required to make a decision as to whether they should send their own kids to a packed school during a pandemic or not. Could this all have been avoided? Schools have been shut down in most of the country since the spring and the probability that schools would remain closed through the fall was a very real possibility meaning there were several months where plans and guidelines could have been made to keep everyone safe.

Takeaway: If you’re a communicator that speaks to educators, students, or parents, how can you support these audiences? All of these groups will desperately need additional support and empowering in the next few months as they manage not only the educational difficulties of remote learning but also the social and emotional challenges. Be sure to keep in mind the volatility of the education system in the next few months as procedures and protocols will likely change suddenly and drastically.

Grade: Getting there, but still a ways to go

Notes: Who knew this would make its way into a pandemic progress report? It’s truly been a year. While social justice issues have been brewing for a while now, this marked the first year that many Americans became aware of just how incredibly bad the problem had gotten. Perhaps it was the witch’s brew of a pandemic, massive unemployment rates, the extra time as a result of unemployment, and growing disdain among many Americans (lots of time to be angry and lots of things to be angry about) that caused the bubble to finally burst, but 2020 marked the year that people finally said: “we need to do better” and actually worked toward it.

Takeaway: Inclusion matters. Representation matters. Equality matters. Audiences see that now more than ever especially thanks to social media. They can also see beyond corporations’ transparent attempts to present as progressive. Audiences crave authenticity. As a communicator, it’s especially important to not play into the trends, but actually build something meaningful. Communicators play a major role in shifting public opinions and thoughts. Use the platform with a purpose.