Schitt’s Creek was the ascendant television phenomenon of 2020. The Netflix comedy swept the Emmys in record-setting fashion. And as the show made its planned graceful exit, it left behind an extraordinary lesson in how to build an audience.

“We’re not teaching them a lesson,” Daniel Levy, the creator of Schitt’s Creek, said. “We’re showing them what life could be like.”

The six-season arc of Schitt’s Creek got its main lift in Season Three when Levy’s character, David, a pansexual (publicly self-identified by ingenious analogy), gained a love interest: the newly introduced character of Patrick, who was at the time not publicly out of the closet. As their courtship developed, it gave the series that most tried and true of narrative motors: a love story. By the end of the series, Patrick was out and he and David were married.

Patrick’s coming out to his family was the focus of one episode, but the fraught drama that tends to heap up around mainstream screen representations of uncloseting was, in Schitt’s Creek, barely there. Although the character worried about telling his parents, they embraced him with only a brief stammer of uncertainty (mainly: what can we do to support you?), and all was well by episode’s end. A brief note during the closing credits gave a message of support and the phone number of a helpline for anyone struggling with coming out. 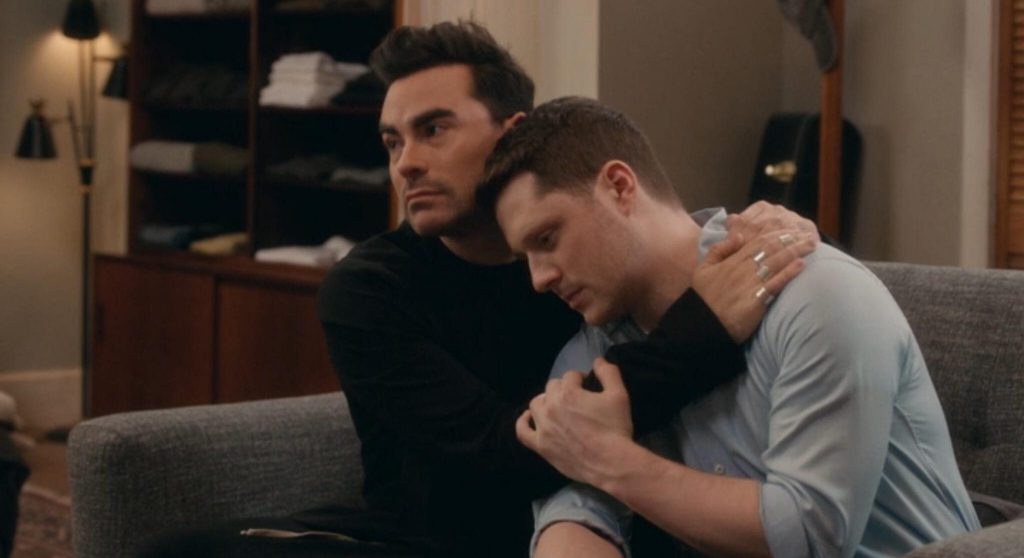 Otherwise, questions of sexual identity and preference were virtually nonexistent in the remote burg of Schitt’s Creek, which was just the kind of backwater where reactionary resistance to out LGBTQ+ presence might be expected. The only explicit prejudice to be heard was limited to the show’s inaugural episode: the rubeophobia of the suddenly penniless Rose family toward Schitt’s Creek upon their arrival. But that prejudice was explicitly, authoritatively—and, above all, lovingly—put to rest in a brief but memorable scene at the end of Season Two. That marked the inflection point after which Schitt’s Creek really began to settle into itself, adding the David-Patrick romance into the mix; when Netflix picked it up soon after, the series had its chance to break big. By the time the six-season run was complete last year, the show was as big as they get.

You could say Schitt’s Creek didn’t present the world as it really is, and you’d be right. But to criticize it on those grounds would be to miss the point. Instead, the series presented the world it envisioned us living in, a place nearly the same as ours but with one crucial difference: no hate. And—just as crucially—all comedy. That’s not to say there were no conflicts; of course there was, otherwise there would have been no plot to speak of and no compulsion to watch. But the conflicts the show depicted centered on the characters themselves, not on the sociocultural “issues” around them.

“It’s fiction, yes,” Levy said in 2019. “But I’ve always been told to lead by example and this felt like a good place to start.”

He had been setting that example all along. “I have no patience for homophobia,” Levy said at the 2018 Vulture Festival. “We show love and tolerance. If you put something like [homophobia] out of the equation, you’re saying that doesn’t exist and shouldn’t exist.” By dramatizing love and tolerance, the show attracted not only a large audience— Schitt’s Creek was the most streamed show on TV by the end of its run—but one which grew on the foundation of that love and tolerance, and returned it in kind.

There were, of course, the festive watch parties; there was the widespread appropriation of “A Little Bit Alexis” by drag performers and other repurposers (including Alexis herself), helping turn it into a bona fide InstaTok phenomenon; there was the remarkable, emotional letter, with nearly 2,000 signatories, from a Facebook group of mothers of LGBTQ+ kids to the Schitt’s Creek cast and crew, thanking the show for “creat[ing] new ways for queer viewers to see themselves represented.” 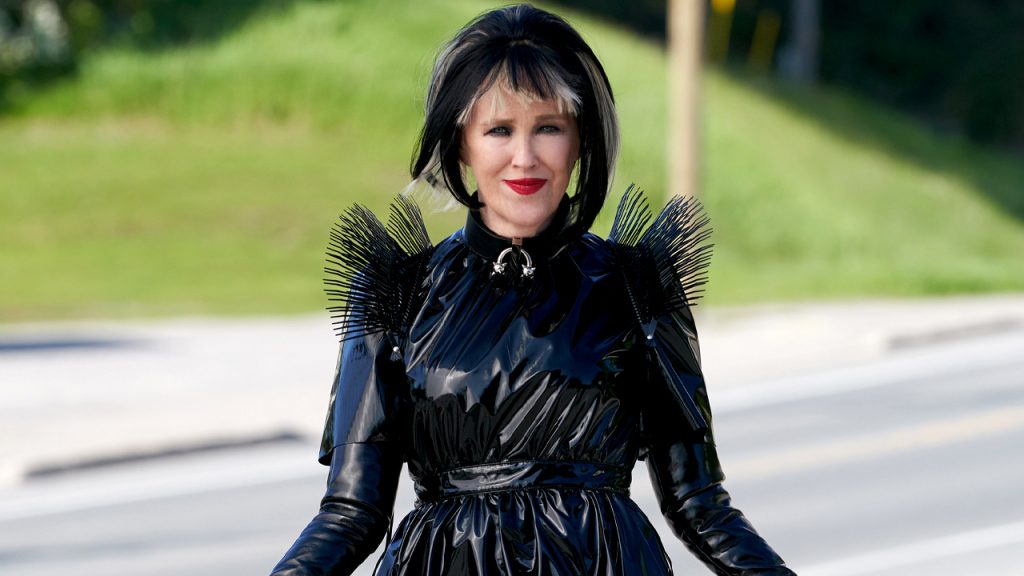 And there was, all throughout the series, Moira Rose’s deepening of her gay-icon status, thanks largely to the character’s famously outlandish couture. Her costumes (along with David’s outré fashion) “add a level of humor that we don’t have to write,” Levy joked, but in fact the Schitt’s Creek took its costuming very seriously. Like the show’s representation of sexuality, Moira’s self-representation was the result of emphatic conceptual attention and very personal creative deliberation. Catherine O’Hara, who played Moira, worked closely with costume designer Debra Hanson to create Moira’s over-the-top look, which was integral to and flowed from both her overall character and the performer who played that character. (Similarly, Annie Murphy, who played O’Hara’s daughter, created the “A Little Bit Alexis” routine herself, at Levy’s request: there was strong creative ownership of the show by its cast.)

Just as importantly, the clothes O’Hara wore as Moira weren’t knockoffs or costume shop recreations. Those were real Alexander McQueens, Pradas and so forth. “We had such a small budget,” Levy said, that “it was almost a year-round experience of mining eBay and vintage stores and consignment apps” for cut-rate deals. Moira’s image was a fanciful and frivolous confection, to be sure, but it was also carefully imagined, personally constructed, and materially authentic. 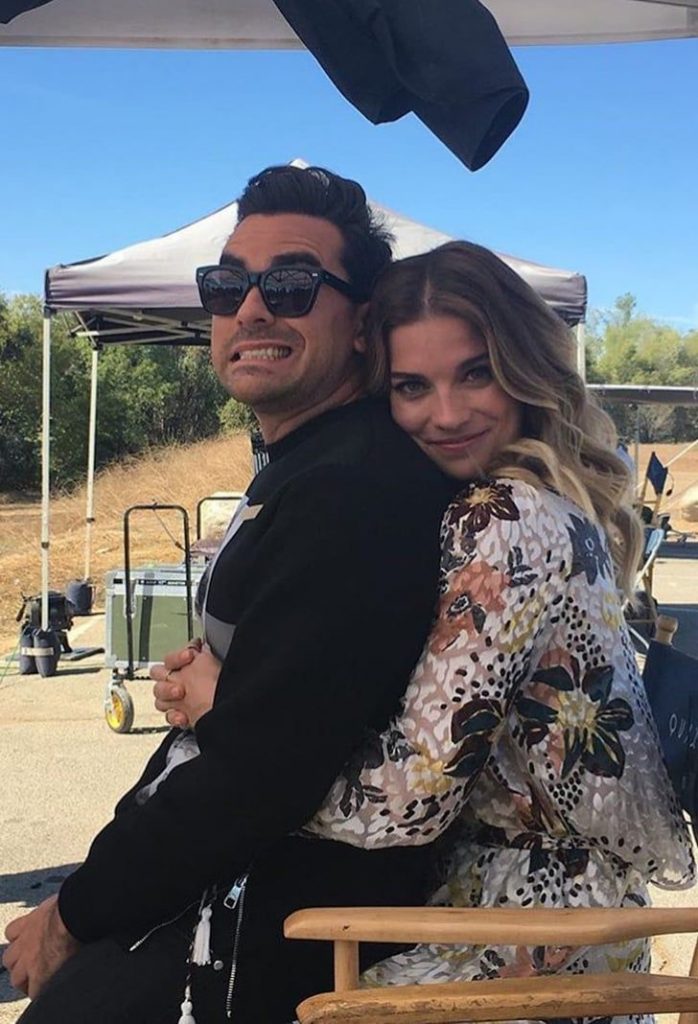 As was the entire world—and, especially, the entire workplace—Levy built. Schitt’s Creek was shot on location in a small town in Canada, the country from which virtually its entire cast hailed. Daniel Levy’s character’s father was played by his actual father, Eugene Levy, an esteemed comedy veteran whose presiding influence was restrained but steadying. In turn, Eugene Levy’s wife on the show, O’Hara, also played his wife in the celebrated 2000 mockumentary Best in Show. (The two comedians have been working together since the 1970’s as members of the Second City comedy ensemble.) Sarah Levy, sister to Daniel and daughter to Eugene, played the waitress in the local café where many of the show’s important scenes took place. The “making-of” feature about Schitt’s Creek released just after the series ended made it clear that the whole cast, not just the Levys, had developed a close-knit intimacy over the show’s six seasons. It was a family (and friends) affair.

So, of course, is making safe spaces where people can grow up. Accepting a GLAAD award in 2019 for Schitt’s Creek’s promotion of acceptance for the LGBTQ+ community, Levy gave a memorable speech. He said he had been blessed, as a gay teen fearful of rejection and ostracization, to receive instead from his family and close friends the essential troika of “love, encouragement and support” that are denied to many non-straight people.

“When I found myself in a position to tell stories on a global scale,” Levy continued, “I seized the opportunity to make a television show that might, in its own way, offer some support, encouragement, and love to those who might not have it in their homes, in their schools, or in their day-to-day lives […] The result was Schitt’s Creek, a place where everybody fits in, and where love is celebrated, and people’s differences are a reason to start a conversation, not end one.”

That Schitt’s Creek became the show everyone was talking about proved how effective its messaging strategy was. There was no sobering, issue-flogging “very special episode”; no moralizing or preaching. Kindness and heartfulness carried every day of the show, even in its cattiest moments. Audiences responded strongly and positively to Schitt’s Creek not because it was an escape fantasy but because it was an ordinary place with a few gifts of blessed omission bestowed upon it—and that made it quietly extraordinary. The show was beloved for what it very deliberately left out.

Schitt’s Creek was a pitch-perfect example of what the writer Megan Mayhew-Bergman proposed in a recent Adapt story about sustainability: “I’ve heard it said that we’re really good at painting these depressing, apocalyptic scenarios, but we’re not good at painting a picture of how good it could be. If we could, as storytellers, try to move people along that continuum, I think that’s more motivating. It’s sharing a vision with people: ‘This is what a just community looks like.’”

That practice of goodness appears in many realms, for example the the asset-based approach that has gained momentum in education. There’s underrated (and often untapped) power in positivity. And positivity doesn’t have to exclude conflict. On the contrary, it can generate the invigorating tension that arises when we say: We can live better, and here’s one way how. That‘s a smarter way to do comedy—and comedy, in turn, is a smarter way to do communication.

Perhaps the final proof of just how successful Schitt’s Creek was at fulfilling Levy’s aspiration for the show was audible in the celebratory adoration that accompanied it off the airwaves. Fans showered the series’ final episode with messages of gratitude and affection. There was scarcely an unhappy comment to be heard anywhere, no complaining that the real world would have to go on without the show, and no bitterness that it ended on its own gracious terms. Schitt’s Creek was loved for exactly what it was, for exactly as long as it lasted. Nothing more or less was demanded of it.

When television programs come to an end, they are not always bid farewell with the “love and tolerance” Levy had gone to such lengths to inspire. For example, as the popular crime series Sherlock evolved, it was beset by frequently aggrieved crowd noise and fan interference that reached a high enough pitch to cause one cast member to complain publicly that making the show was no longer fun. When the series ended in 2017—without an official announcement of a decision to discontinue it; it simply stopped appearing—its concluding episode was met with vociferous audience objections that virtually eclipsed the show itself and cast a pall over its finale. The after-chorus of boos and rancor almost surely contributed to Sherlock’s producers’ decision not to resume the show.

This is not to criticize Sherlock for not deliberately imagining a particular kind of audience for itself. That isn’t necessarily in the job description of creators and communicators. But we might want to start thinking of it as an opportunity if not as a requirement: to bake into our product, and into the way we communicate about that product, not merely an idea of the audience we want to attract, but of the one we want to create.